We’re launching a horde of tiny satellites, and that might eventually make space flight unusable

Space junk is cluttering space. One day, we might not be able to launch anything anymore.

by Tibi Puiu
in News, Space
Reading Time: 4 mins read
A A 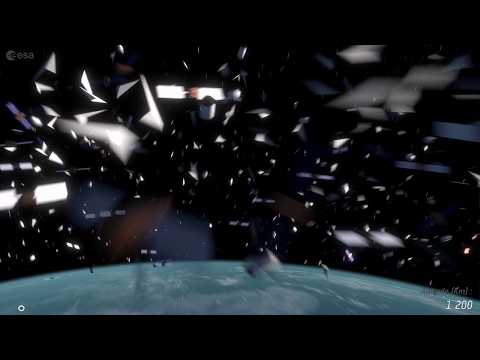 Earlier this year, India made headlines after it launched a record-breaking 104 satellites into the planet’s orbit. Only three actually look like ‘real’ satellites, while the other 101 are called ‘nanosatellites’ because they don’t weigh more than five or six kilograms. These can serve a variety of functions, from communications to simple science experiments. Overall, though tiny when compared with more expensive satellites, these instruments help science. At the same time, however, they’re crowding the planet’s orbit. Already, some routes are too dangerous to launch rockets because the risk of colliding with some space junk is just too big to ignore. In time, the problem will only get worse.

This growing problem was the main attraction of the recent European Conference on Space Debris where thousands of scientists, journalists, and policymakers gathered to hear about the latest in ‘space junk’.

It didn’t take too long since Sputnik first opened its comm link in 1957 for Earth’s orbit to get dangerously crowded. We’ve launched some 7,000 spacecraft in space since then, but only a tiny fraction of these objects are actually usable like weather and communication satellites or the International Space Station. Actually, there’s no one more concerned about space junk than the handful of men and women astronauts stationed there. Speaking through an internet link, French astronaut Thomas Pesquet told the conference audience he and colleagues routinely man their escape pods when a red alert signals a possible collision with a piece of space junk.

“This happened four times,” Pesquet said. “In my own interests, let me wish you a successful conference.”

How did we get here?

According to NASA, there are millions of pieces of debris or ‘space junk’ orbiting Earth. At the conference, the ESA shared its latest figures according to which there are around 5,000 objects larger than 1 meter in orbit, 20,000 larger than 10cm, and 750,000 larger than 1cm. That’s trackable debris since most of the junk isn’t tracked. These tiny space junk that can be anything from some shrapnel to a screw, to paint flake, and are incredibly dangerous. Despite their small size, all that junk whizzes at 17,500 mph which means the transferred kinetic energy can be huge when they impact a spacecraft or satellite. You might remember a scene from the movie Gravity where the International Space Station is torn apart by space junk. ESA Director General Jan Woerner said that despite its many shortcomings, the movie does a pretty good job at illustrating the potential damage space debris can cause.

It’s hard to pin the blame on someone specific. Basically, every government screwed up at least on one occasion. In 1996, a French satellite was hit and damaged by the debris caused by some other French rocket which exploded a decade earlier. Yes, some people still think it’s actually a good idea to blow up stuff in the space. In 2007, for instance, China destroyed one of its old weather satellites with a missile causing 3,000 pieces of debris.

Space junk leads to more space junk. Back in the 1970s, a NASA scientist called  Donald Kessler came up with a theory called the “Kessler syndrome” which basically posits collisions in Earth’s orbit set off a chain reaction of space junk begetting more space junk until, eventually, there’s not enough room to launch a needle safely.

At the conference, one ESA official confessed a particularly crowded region is already unusable. As satellites become smaller, more useful, and cheaper, the Kessler syndrome is turning more and more into a worrisome reality. Hugh Lewis, an aerospace researcher with the University of Southampton, simulated what would happen if we launched 270 nano-satellites each year for 50 years and found the risk of space junk collision doubled.

There is no viable solution for space junk

In 2012, Swiss scientists launched a pilot program called the CleanSpace One which is basically a ‘space janitor’. The function of the satellite is to track and offset debris so that their trajectory puts them on a collision course with Earth’s atmosphere. Japan has a mission called Kounotori 6 which can tether space junk with electromagnetic forces.  Astroscale, a Japanese startup, plans is to launch a satellite called ELSA-1 that will track debris and stick to it with glue. Other ideas are even wilder, like using lasers to vaporize the surfaces of small pieces and force them down.

The bottom line, however, is that there is no current viable solution to space junk. No yet, anyway. The only best thing everyone can do right now is to not make the problem worse.