by Mihai Andrei
in Space flight

As promised, we’ll be keeping you posted with what the Dragon capsule is doing, on its remarkable way to the International Space Station (ISS). The private capsule, owned by SpaceX, was launched from the Falcon rocket and is now right on track to deliver a half-ton of supplies and become the first commercial vessel to visit the space station.

Landing this mission is crucial not only because it would mark the beginning of a new chapter in space flight, but also because a collision at orbital speeds would prove to be catastrophic for the ISS. 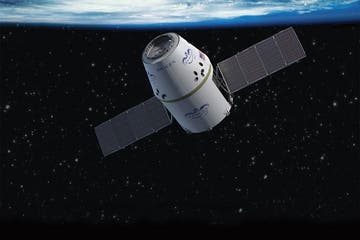 President Barack Obama is pushing commercial ventures in orbit so NASA can focus on bigger missions, but many doubt this decision, especially considering the dire times NASA is going through. Although the capsule is currently unmanned, Elon Musk, SpaceX maestro, billionaire, and chief architect believes he can have people flying up and down the ISS in three or four years.

Until now, since the retiring of the old American shuttles, the ISS has been relying on the Russians, Japanese and Europeans to carry cargo in and out of orbit, but now, SpaceX seems to provide a much better option, especially since unlike the older shuttles, Dragon is designed to safely parachute into the ocean