The Rosetta Probe Prepares for First Ever Comet Landing

Launched by the European Space Agency (ESA), the Rosetta probe is nearing a crucial part in its mission – it will soon send a lander carrying 10 instruments on a comet. It will be the first time mankind lands anything on a comet, and the study could provide valuable information about comets and our solar system in general.

You can watch the landing here just as it takes place, thanks to live streaming from the ESA. The scheduled time is 0835 GMT on Wednesday.

Rosetta is a robotic space probe built and launched by the European Space Agency to perform a detailed study of comet 67P/Churyumov–Gerasimenko. The probe is already orbiting the comet and has revealed the most accurate topography of a comet. Rosetta started scientific operations on 7 May 2014, while still at a distance of almost two million km from the comet; then, the comet was less than a pixel on the probe’s screen, but it soon started to reveal its secrets.

The first thing astronomers noted is the shape of the comet, which was significantly different from what they were expecting, based on telescope observations. They then learned that the comet is much warmer than what was previously believed, and the info keeps coming in. Now, astronomers and engineers want to take it to the next level, and actually land the Philae probe on the comet – in an attempt to find out not only how the comet is, but how our solar system came to be. 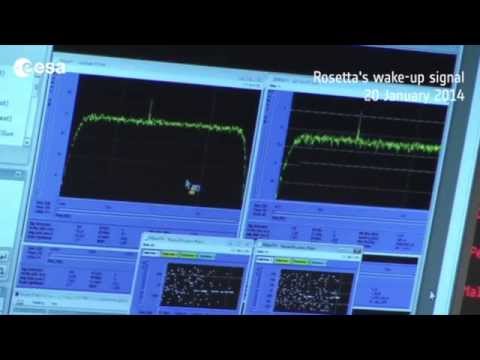 The currently accepted theory is that most comets are primordial ice and carbon dust left over from the building of the Solar System, doomed to circle the sun in varying orbits, ranging from a few years to a few thousand years.

Early Wednesday, scientists at the mission control center in Darmstadt, Germany, will decide whether to give Rosetta the go-ahead to release its lander, Philae. The atmosphere at the ESA headquarters is very tense, as the maneuver is difficult and perilous for the lander. Also, there was a bit of worry on Monday, as Philae “took a bit longer than expected” to be activated, said Paolo Ferri, mission leader at Darmstadt.

“We were a bit worried at first that the temperature would be wrong (for the descent) but it all worked out. We didn’t lost any time,” Ferri said. “The robot’s batteries should be charged up by tonight.”

Every tiny inaccuracy or miscalculation could spell disaster, sending the 100-kilogram (220-pound) landing craft smashing onto the comet; and what a shame it would be! Philae has traveled 6.5 billion kilometres (four billion miles) on Rosetta, but the last 20 km will be the most dangerous. In order to successfully reach the comet, the lander must perform a complicated ballet, coordinated from home.

The Rosetta mission was approved all the way back in 1993, and it’s one of the more ambitious space projects. It would be the first time we would land something on a comet, an extremely difficult and rewarding task.