by Mihai Andrei
in Astronomy, News
A A

A spacecraft from Earth is about to do something no other spacecraft has done before: take off, orbit a comet, and send a lander to it.

The European Space Agency (ESA), NASA’s European counterpart has developed the Rosetta probe to hurl towards Comet 67P/Churyumov-Gerasimenko. The mission is simple in principle, but the work behind it is gargantuan: study the comet at close-range, as it changes from being a fireball when it’s close to the sun, to a cold ball of ice when it strays from our star. This is its amazing road: 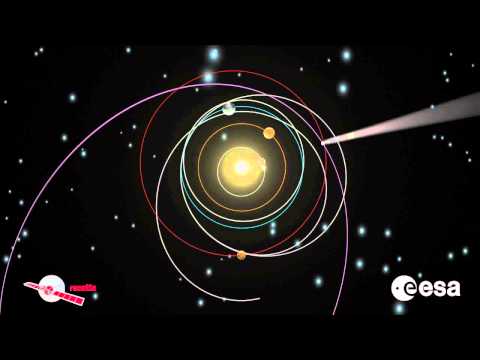 “Comet 67P is coming alive,” says Claudia Alexander, project scientist for the U.S. Rosetta Project at JPL. “And it is even more active than I expected.”

Rosetta was launched all the way back in 2004, spending the past few years chasing the comet throughout the solar system; seriously, the math behind the programming of the spacecraft is mind boggling – chasing a comet for 10 years, predicting and taking into consideration every gravitational effect is a spectacular achievement.

In January 2014, when the comet was in sight, Rosetta finally woke up and turned on its cameras. Initially, it seemed inert, with nothing drawing the eye towards it. But on May 4th, a bright cloud appeared around its nucleus.

“It’s beginning to look like a real comet,” says Holger Sierks of the Max Planck Institute for Solar System Research in Germany where Rosetta’s OSIRIS science camera was built. “It is hard to believe,” he says, “that only a few months from now, Rosetta will be deep inside this cloud of dust and en route to the origin of the comet’s activity.”

Flybys past comets are really interesting, but this is taking things to the next level: in November, a lander will descend from the spacecraft and touch down on the comet’s surface. The lander’s name is “Philae” after an island in the Nile – the site where the Rosetta stone was discovered.

“A flyby is just a tantalizing glimpse of a comet at one stage in its evolution,” points out Alexander. “Rosetta is different. It will orbit 67P for 17 months. We’ll see this comet evolve right before our eyes as we accompany it toward the sun and back out again.”

After it has a firm grip of the comet, the lander will commence an unprecedented first-hand study of a comet’s nucleus while Rosetta continues to monitor developments overhead.

“Our target is ahead,” says Alexander, “and Rosetta is chasing it down!”