by Mihai Andrei
in Inventions, Space
Reading Time: 1 min read
A A
Share on FacebookShare on TwitterSubmit to Reddit

NASA has developed a harpoon that would make even the most pretentious pirate jealous: it can latch on to comets with surgical precision, without having to land on them. 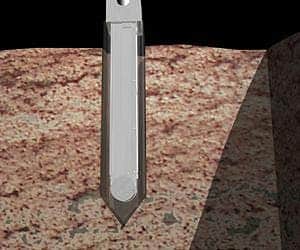 The harpoon, which measures six feet tall (almost two meters) was made out of pair of springs normally used to provide the suspension for trucks; the bow string is made out of a steel cable which is half an inch thick.

It can fire projectiles at over 30 meters per second, and the projectiles are fired into large drums filled with sand, pebbles or ice.

“We had to bolt it to the floor, because the recoil made the whole testbed jump after every shot,” the BBC quoted the project’s lead engineer, Donald Wegel as saying.

Engineers from the US space agency’s Goddard Space Flight Center in Greenbelt, Maryland believe this method of gathering samples is much safer and simpler than actually landing on the comets. The harpoon would be fired with ‘surgical precision’ from a space ship hovering nearby the comet. This would also be useful since due to the virtual lack of comet gravity, any ship willing to land on such a celestial body would be forced to latch itself to the comet.