by Mihai Andrei
in Geology, Space
Reading Time: 3 mins read
A A
Share on FacebookShare on TwitterSubmit to Reddit

For the first time, researchers have found evidence of a comet entering Earth’s atmosphere and exploding, obliterating everything in its path before ultimately crashing down into the Sahara.

Many people will probably be asking themselves “Didn’t we find comet evidence on Earth before?”. No, not really – if you did wondeer that, then you’re probably mistaking comets for asteroids. We did find lots of (usually small) asteroid impact sites, but no comet ones.

A comet is an icy small Solar System body spinning around the Sun; as it gets closer to our star, it heats up and begins to outgas, sometimes displaying a visible atmosphere or even a tail. Asteroids are minor planets, but the difference between comets and asteroids is that comets feature an extended, gravitationally unbound atmosphere surrounding their central nucleus.

Researchers have found glass out in the Sahara that’s basically from melted sand, which came from an impact which took place some 28 million years ago.

“Comets always visit our skies – they’re these dirty snowballs of ice mixed with dust – but never before in history has material from a comet ever been found on Earth,” says Professor David Block of Wits University.

As the comet entered our atmosphere somewhere above today’s Egypt, it heated up the sand beneath it to a temperature of about 2 000 degrees Celsius, creating a huge amount of yellow silica glass which lies scattered over a 6 000 square kilometer area in the Sahara. Interestingly enough, a piece of that very same comet can be found in Tutankhamun’s brooch (the yellow scarab). 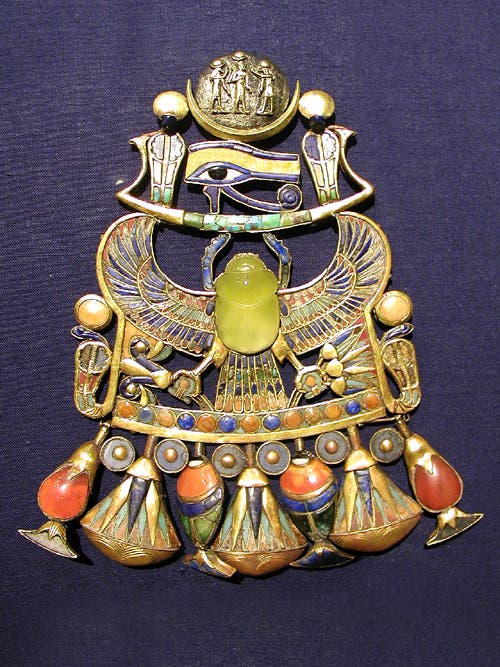 At the center of this scattered yellow glass, geologists found mysterious black pebble; after conducting chemical analysis on the rock and eliminating all other possibilities, geologists came to the conclusion that it could only be a comet.

“It’s a typical scientific euphoria when you eliminate all other options and come to the realisation of what it must be,” said Jan Kramers of the University of Johannesburg, who worked alongside Dr Marco Andreoli of the South African Nuclear Energy Corporation, and Chris Harris of the University of Cape Town. .

“Diamonds are produced from carbon bearing material. Normally they form deep in the earth, where the pressure is high, but you can also generate very high pressure with shock. Part of the comet impacted and the shock of the impact produced the diamonds,” says Kramers.

Comet material is very elusive – it has only been found so far as microscopic sized dust particles in the upper atmosphere and some carbon-rich dust in the Antarctic ice. Space agencies (NASA included) have spent astronomic sums to find pristine samples of comet material – because it contains inside it valuable clues about our solar system’s birth.

“Comets contain the very secrets to unlocking the formation of our solar system and this discovery gives us an unprecedented opportunity to study comet material first hand,” says Block.