Earth may have generated its own water – geologically

by Mihai Andrei
in Geology, News, Space
Reading Time: 3 mins read
A A
Share on FacebookShare on TwitterSubmit to Reddit

A new study may have finally found where Earth’s water came from. There are currently two competing theories, with one claiming that our planet generated its own water geologically, while the other suggests that water was brought by icy comets or asteroids from outside. A new study concluded that most of the water we see today likely comes from the Earth’s mantle.

Water beneath the surface

Until recently, the idea that water came to Earth from somewhere else in the solar system seemed to have more support, but studies conducted by the European Space Agency on the Rosetta missions showed that water almost certainly didn’t come from comets. Wendy Panero, associate professor of earth sciences at Ohio State, and doctoral student Jeff Pigott believe that when the Earth formed, it had huge bodies of water in its interior, and has been continuously supplying water to the surface via plate tectonics, circulating material upward from the mantle.

Researchers have long known that there is some water in the earth’s mantle, but nobody knows just how much. Because you can’t go 40 km deep and study the mantle, you have to rely on indirect information and computer simulations.

“When we look into the origins of water on Earth, what we’re really asking is, why are we so different than all the other planets?” Panero said. “In this solar system, Earth is unique because we have liquid water on the surface. We’re also the only planet with active plate tectonics. Maybe this water in the mantle is key to plate tectonics, and that’s part of what makes Earth habitable.”

The thing is, when we’re talking about water in the mantle, it’s not actually liquid water – what seems dry to the human eye may actually have significant quantities of water – in the form of hydrogen and oxygen waters. Hydrogen is typically stored in crystal voids and defects, while oxygen is usually plentiful in most minerals. Certain reactions can free up the hydrogen and oxygen, resulting in water; but could it be enough water to amount for the oceans we see today? 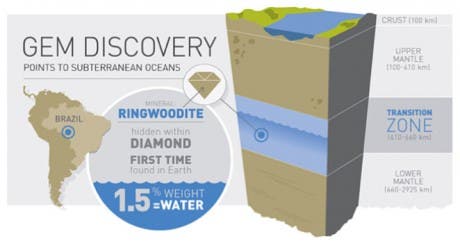 The key element here is ringwoodite.

Olivine is a magnesium-iron silicate typically found in the mantle and igneous rocks. However, in the mantle, at very high pressures and temperatures, the olivine structure is no longer stable. Below depths of about 410 km (250 mi) olivine undergoes a transformation, transforming into ringwoodite or bridgmanite. Ringwoodite is notable for being able to contain hydroxide ions (oxygen and hydrogen atoms bound together) and previous research has already shown that the earth’s mantle holds huge quantities of water.

Now, this team has found that the mineral bridgmanite doesn’t contain enough water to play a significant role in this issue – so it’s all about the ringwoodite. But the question is – if ringwoodite is trapped in the mantle and the water is drained towards the surface in plate tectonics, how does our planet still have water reserves now, in the mantle?

But while they were creating some models and simulations of ringwoodite water behavior, another likely candidate emerged: garnet. Garnet could be a water carrier, transporting some of the water to the surface, while some of it still remains in the mantle.