An update on Gliese 581, the Earth-like planet

If you don’t remember Gliese, it is the long talked about earth like planet, located in the Goldilocks area. Last time we checked, there was a chance that this could be the first habitable planet encountered so far, at least according to research conducted by a team from the University of Paris. 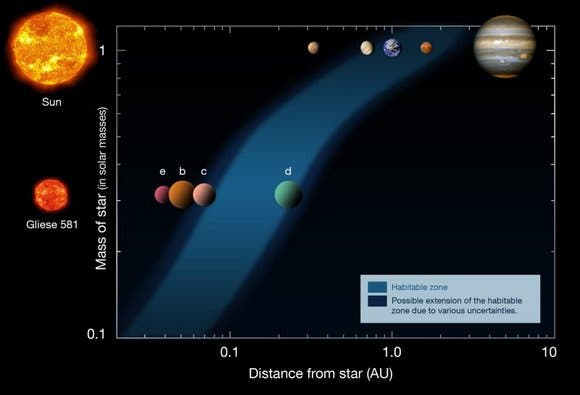 This rocky planet found itself just on the edge of the Goldilocks zone, which means that under the right atmospheric conditions, liquid water could exist on its surface, which means there is a good chance life might also be present there – more or less evolved. Finding it after such a small time of searching and at such proximity made researchers believe that the proportion of stars with habitable planets might be larger than 10 percent.

But the team’s work was based on 1D simulations of a column of hypothetical atmospheres on the day side of the planet. In order to have a better understanding of what’s really happening on the planet, a new, 3D simulation would be needed. Thankfully, the same team of researchers did just that. 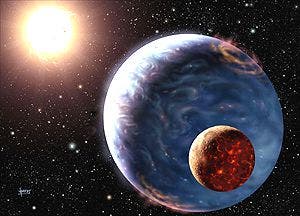 The new investigation was absolutely necessary because of suspicions that Gliese might be tidally locked, which means that its Sun only ‘sees’ one side of it – like the Moon is for the Earth. If this was the case, than half of the planet would have eternal day, and half of it would have eternal night; thus, on the night side, temperatures would be much lower and gases would find themselves in an impossibility to remain gaseous, freezing into ice crystals. They would never melt and be released into the atmosphere again, thus causing what is called an atmospheric collapse.

To conduct this simulation they assumed that the climate was dominated by the greenhouse effects of CO2 and H2O since this is true for all rocky planets with significant atmospheres that we know about. As they did in their previous attempt, they performed several iterations, each time varying the atmospheric conditions and adding or removing another factor.

Their conclusion was that Gliese 581g… might be habitable. Some of the cases yielded positive outcomes, but some did not. In order for it to actually be habitable, the atmosphere composition and thickness has to be in certain parameters, and the potential for surface liquid water exists for a “wide range of plausible cases”. Since the planet does not transit the star, spectral analysis through transmission of starlight through the atmosphere will not be possible.

However, considering how (relatively) close the planet is to Earth (only 20 light years away), the research team suggests observing the spectra directly in the infrared portion of the spectra using future generations of instruments, which could give some strong evidence of habitability of the planet.