Water detected in a planet outside our solar system

by Mihai Andrei
in Alien life, Astrophysics
Reading Time: 3 mins read
A A
Share on FacebookShare on TwitterSubmit to Reddit

Astronomers have recently discovered water in the atmosphere of a planet outside our solar system, using a novel technique – they believe that this new method could reveal more and more planets which feature water; so far, all life as we know it, is based on water. They made their discovery on a Jupiter-like planet that is orbiting the nearby star tau Boötis.

Researchers had already discovered water vapor on a handful of planets – but there were only two ways of doing this, both pretty limited:

– the first one worked only if the studied planet has an orbit that passes it in front of its star, when viewed from Earth.
– the other method worked only if he planet is sufficiently far away from its host star.

Needless to say, most of the exoplanets don’t fill into either of these categories – so it was virtually impossible to find water. 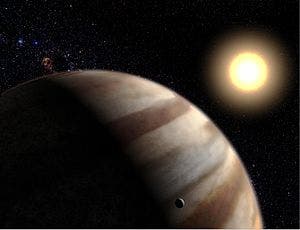 Chad Bender, a research associate in the Penn State Department of Astronomy and Astrophysics and a co-author of the paper, talked about their discovery:

“We now are applying our effective new infrared technique to several other non-transiting planets orbiting stars near the Sun,” Bender said. “These planets are much closer to us than the nearest transiting planets, but largely have been ignored by astronomers because directly measuring their atmospheres with previously existing techniques was difficult or impossible.” With the new detection technique and more-powerful future telescopes such as the James Webb Space Telescope and the Thirty Meter Telescope, the astronomers expect to be able to examine the atmospheres of planets that are much cooler and more distant from their host stars, where liquid water is even more likely to exist.

Tau Boötis b is an extrasolar planet approximately 51 light-years away – while extremely far away per se, it’s relatively close in astronomic terms; it is one of the very first exoplanets ever discovered. It’s a so-called hot Jupiter, with a mass approximately 4 times larger than that of Jupiter, and it orbits its star in a so-called “torch orbit”, at a distance from the star less than one seventh that of Mercury’s from the Sun. An orbital revolution (a “year”) takes only 3 days 7.5 hours to complete. Although it hasn’t been directly calculated, it seems very safe to assume that the planet is made of gas, and it also seems extremely unlikely that the planet holds life – the estimated temperature is over 1.300 degrees Celsius (over 2400 Fahrenheit).

“Planets like tau Boötes b, which are as massive as Jupiter but much hotter, do not exist in our solar system. Our detection of water in the atmosphere of tau Boötes b is important because it helps us understand how these exotic hot-Jupiter planets form and evolve. It also demonstrates the effectiveness of our new technique, which detects the infrared radiation in the atmospheres of these planets.”

Bender is leading a larger project to characterize the atmospheres of many hot-Jupiter extrasolar planets. Hopefully, as they develop and refine the technique more and more, they will be able to apply it to more Earth-like planets – ultimately, discovering which planets have the biggest chances of hosting life.