It always baffles me how some publish completely misleading clickbait titles.

It always baffles me how some publish completely misleading clickbait titles. The most recent one is this satellite image of the Nile river, which has reportedly “gone blood red”. Sorry to burst your bubble, but there’s no biblical plague, not even an algae bloom or anything that colored the Nile – it’s simply an image with several spectral bands overlapping, resulting in unnatural colors; this type of visualization helps in monitoring environmental parameters such as vegetation. In other words, the Nile isn’t red, it just looks that way. 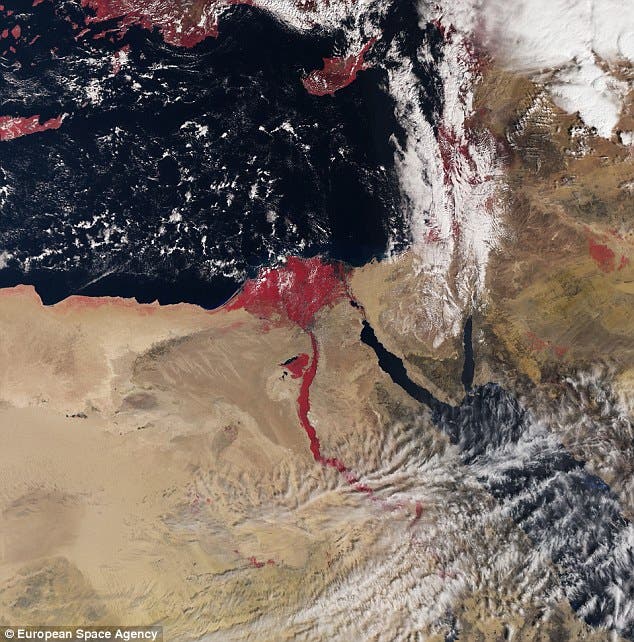 The picture was taken by an European Space Agency satellite called Sentinel-3A. The satellite features a variety of high sensitivity instruments that will measure Earth’s oceans, land, ice and atmosphere. Sentinel-3’s Sea and Land Surface Temperature Radiometer (SLSTR) measures the energy radiating from Earth’s surface in nine spectral bands, including visible and infrared. Herein lies the mystery of the red river.

When specific spectral bands are overlapped on top of each other, they can make certain things about the surface stand out. Let’s take for example the normalized difference vegetation index (NDVI), one of the more common ones. The NDVI uses the visible and near-infrared bands of the electromagnetic spectrum to see where there is live vegetation.

This is very similar to what’s visible in the picture – the Nile has some living vegetation growing in and around it, which is why it appears bright red. Here, the satellite combined radiometer and color data. It’s a really cool picture, and one that does a great job at highlighting the usefulness of the satellite. Hopefully, science outlets will appreciate that and refrain from needlessly exaggerating or misrepresenting the facts.

As for Sentinel – it has a big mission ahead of it, and lots of useful data to provide.

‘The launch of Sentinel-3A further expands the fleet of dedicated missions for Copernicus services,’ Philippe Brunet, Director of the European Commission’s Directorate-General for Internal Market, Industry, Entrepreneurship and Small- and Medium-sized Enterprises, said.
‘This mission is particularly important as it will contribute to the Copernicus Marine Environment Monitoring Service and the global land component of the Copernicus Land Service.’