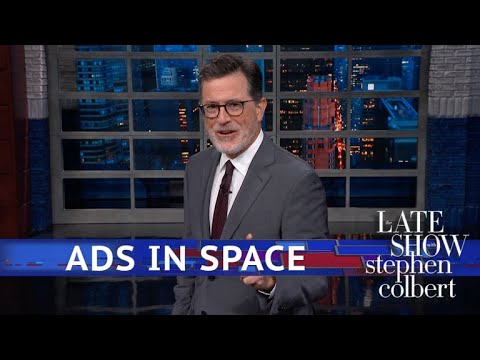 Jim Bridenstine, NASA’s administrator, asked a committee of the NASA Advisory Council whether it is possible to raise funds for the space agency’s missions by selling various rights to corporate sponsors.

Additionally, Bridenstine is also considering the possibility of allowing astronauts to sign endorsement deals. Perhaps they could appear on cereal boxes like sports stars, Bridenstine said. All those spacecraft delivering cargo back and forth between Earth and International Space Station? Well, that’s an opportunity for certain companies to access some prime branding real estate.

Okay, why don’t we name Mars after Coca-Cola while we’re at it? Stephen Colbert illustrated how absurdly this idea — which, to be frank, isn’t the worst we’ve heard from this administration — could play out. The Late Show host poked fun at Bridenstine’s proposition by showing his audience what the moon landings might have looked like with such rules in place.

Right now, federal employees are prohibited from endorsing commercial projects, and, according to NASA’s own ethics guidelines, employees may not use “public office for private gain”. Bridenstine is aware of this fact but said that he would like the committee to explore the possibility to exempt certain NASA employees and operations from the rule.

Corporate sponsorships in space aren’t exactly new. In 2000, Pizza Hut strapped its logo on a Russian rocket, for instance. Russian cosmonauts, who are not subject to the same rules as NASA, have also signed endorsement deals. Cosmonaut Mikhail Tyurin hit a golf ball into orbit as part of a paid sponsorship by Element 21, a Canadian golf company.

To be fair, NASA really needs a lot of money. The agency has its eyes set on returning to the moon, to go with long-term lofty goals of landing on an asteroid and sending humans to Mars. Current budget proposals, meanwhile, suggest that financing for NASA will remain flat through 2023.

Such missions cost billions of dollars. Any advertising revenue would barely make a dent in a sum so large. No one wants to see astronauts plastered in logos like NASCAR racers or see the experience of going into space marred by ads. For some people so used with the grind of capitalism, this might be a weird idea — but there are things that can’t and shouldn’t be up for sale.