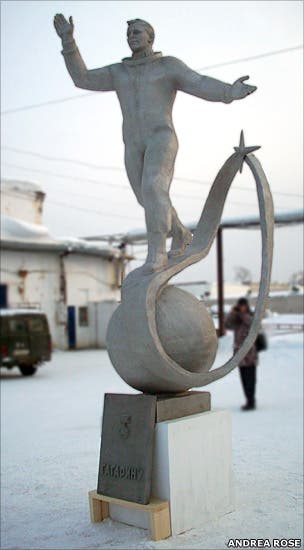 As long as space and science is concerned, April is clearly Yuri Gagarin month, the first man in space, celebrating 50 years since his historic orbital flight. Besides having a Soyuz spacecraft named after him, another recent celebration of Yuri Gagarin include the erection of a statue in London in his honor.

The zinc-alloy figure will sit just off The Mall, next to Admiralty Arch, where Gagarin met the then UK Prime Minister Harold MacMillan, and will be placed right near the statue of another great explorer,the circumnavigator of the globe – Captain James Cook.

The 3.5m (12ft) statue is a gift from the Russian Space Agency (Roscosmos) to the British Council, the organisation which represents the UK culturally abroad. The statue will actually be a replica of the one currently residing in Lubertsy, Russia, where Gagarin used to train as a foundry worked in his teenage years, since the town inhabitants were reluncted to part with such an important symbol.

The original was made in 1984 to celebrate what would have been Gagarin’s 50th birthday – he died in a plane crash aged 34,” explained Andrea Rose, director of visual arts at the British Council.

“It will be patinated, but it will be quite silvery. We wanted it to look just like the original.

“It shows Gagarin in a very typical mode: he’s wearing a spacesuit; his profession is on show. He’s also standing on a globe and the trajectory of his orbit is around him.”

The statue will be formally unveiled in London on 14 July by the cosmonaut’s daughter, Elena Gagarina, who is the director of the Kremlin Museums.