by Mihai Andrei
in Astronomy, Space

A piece of rock traveling at at 61,000 km/h punched a crater 40 metres wide on the surface of the Moon, producing a flash that could be seen from Earth. 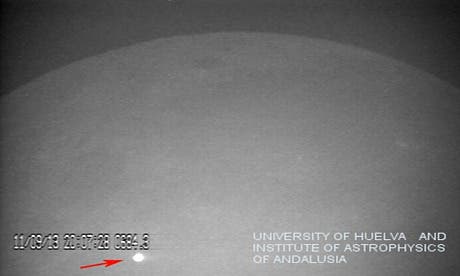 I feel like Hollywood can ruin your expectations when talking about huge meteoritic impacts – we’re dealing with a meteorite here that’s way smaller than a car, weighing 400 kg; its diameter is around 1 meter. But due to its very high speed (40,000 mph), the meteorite punched a significant crater, 40 meters across.

The impact energy was equivalent to 15 tonnes of TNT, crashing into the so-called Mare Nubium (“sea of clouds” ) – a lunar mare. For some reason, many other websites (the Guardian for example) claim that the meteorite “…ploughed into an ancient lava-filled basin…” – which could leave the impression that there are actually lava basins on the surface of the Moon – something which, of course, isn’t true. They probably mean solidified lava – which is something commonly known as … rock.

The event was recorded by Spanish telescopes as part of their MIDAS project (Moon Impacts Detection and Analysis System). Even though this event took place back in 2013, it was officially announced and described just now, in a paper published in the Monthly Notices of the Royal Astronomical Society. Astronomer Jose Madiedo, who leads the Midas project at the University of Huelva processed the crash on 11 September 2013.

“When I saw it on the screen I realised I had witnessed a rare and unusual event. It was really huge. I couldn’t imagine such a bright event,” he said. “We image a lot of impacts on the moon, but they’re caused by very small rocks. They can be the size of a nut, and just a few grammes, and go up to 1kg. But this event was really impressive and very rare,” he said.

The impact was approximately three times larger than the second largest one, observed by NASA last year.

Unlike the Earth, the Moon doesn’t have an atmosphere to help protect it against meteoritic impacts. A rock of this size would be pretty much harmless on Earth, because friction would almost completely destroy it, by the time it reaches Earth. Though parts of very resistant rock might survive the intense heat of entry and reach the ground as small meteorites, they pose no real threat for humans, astronomers explain. However, researchers can study this impact and learn more about threats to Earth.

“We are very close neighbours.What happens on the moon can also happen on the Earth,” he said. “This impact … shows that the rate of impacts on our planet for rocks of this size, around one metre in diameter, is about 10 times greater than we thought.”