Astronomers from the the Armagh Observatory in Northern Ireland declared that a recently discovered asteroid has been following our planet in the past 250.000 years, and it may be in fact closely related to Earth. 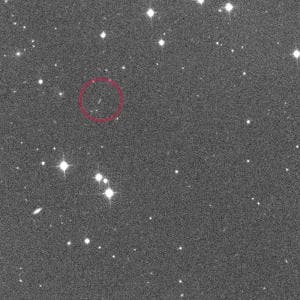 Two months after it was discovered with the WISE survey satellite, the asteroid caught the attention of two scientists: Apostolos “Tolis” Christou and David Asher, who made some interesting remarks about it.

“Its average distance from the Sun is identical to that of the Earth,” says Dr Christou, “but what really impressed me at the time was how Earth-like its orbit was.” Most near-Earth Asteroids — NEAs for short — have very eccentric, or egg-shaped, orbits that take the asteroid right through the inner solar system. But the new object, designated 2010 SO16, is different. Its orbit is almost circular so that it cannot come close to any other planet in the solar system except Earth.”

Following these observations, researchers set out to figure out how stable this orbit is, and for how long the asteroid has been following this route. However, in their calculations they had to take into consideration the asteroid’s current orbit uncertainty.

“Not knowing precisely the location of a newly-discovered NEA is quite common,” explained Dr Asher. “The only way to eliminate the uncertainty is to keep tracking the asteroid for as long as possible, usually months or years.”

But in this case, scientists were able to bypass that procedure by creating virtual clones, virtually for each plausible orbit it might have, and simulating the results of the gravitity two million years in the past and in the future. What they found was that in every simulation the asteroid remained in a “horseshoe” state with respect to Earth. In this configuration, an object mimics very closely the orbital motion of our planet around the Sun, but as seen from Earth it appears to slowly trace out a horseshoe shape in space. In this case, the asteroid is terraphobic.

“It keeps well away from the Earth. So well, in fact, that it has likely been in this orbit for several hundred thousand years, never coming closer to our planet than 50 times the distance to the Moon.” This is where it is now, near the end of the horseshoe trailing Earth

Ultimately, they would like to know where it comes from, but even though they already have a few theories, the problem is much more complicated. For the time being, they are studying its physical properties, especially colour, which plays a very important role.

“Colour, a measure of an asteroid’s reflectivity across the electromagnetic spectrum, can tell you a lot about its origin,” they explain. “With this information we can start testing possible origin scenarios with hard data. If it proves to be unique in some way, it may be worth sending a probe to study it up close, and perhaps bring back a sample for laboratory scrutiny.”.