by Tibi Puiu
in Space, Studies

The plot of the Hollywood blockbuster flick Armageddon is fairly simple – a giant asteroid is hurling towards Earth, threatening to obliterate all life on the planet as we know it. A team of brave oil-drillers is sent on the space rock to diffuse the threat by detonating a nuclear warhead placed inside the asteroid itself. Apparently, a group of scientists found the prospect exciting enough to actually study whether this kind of action would be effective in case of a real situation such as this and modeled how a nuclear bomb would fair against an asteroid. Let’s just say the dinosaurs weren’t so lucky. 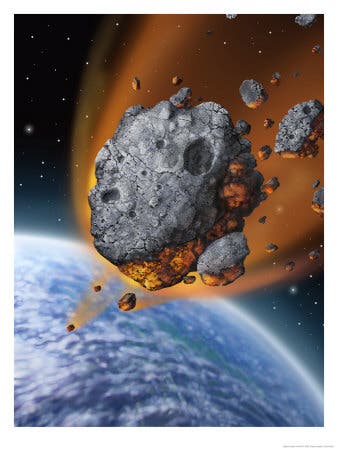 Los Alamos National Laboratory scientists performed a supercomputer simulation to model how effective a nuclear bomb would be in anihalating the threat posed by an asteroid. For their analysis, the team assumed an asteroid 1650-foot in diameter and used a virtual 1-megaton nuclear bomb, roughly 50 times more powerful than the one used by the US in WWII. The study didn’t address the means by which the bomb would actually get brought to the asteroid, and was detonated at the surface, rather than inside the asteroid itself.

The 3-D modeling was performed by the Cielo supercomputer with 32,000 processors, and its conclusions showed that the initial, cataclysmic threat posed by such a large asteroid would be averted, however it wouldn’t be completely destroyed. The peril of smaller asteroid fragments heading towards Earth still remained, but whose collision wouldn’t cause nearly as much damage as the bulk body.

“Ultimately this 1-megaton blast will disrupt all of the rocks in the rockpile of this asteroid, and if this were an Earth-crossing asteroid, would fully mitigate the hazard represented by the initial asteroid itself,” Los Alamos scientist Bob Weaver said in a recent video released by the lab.

Numerous space probes have met up with asteroids in deep space before, including NASA’s Dawn Spacecraft, which is currently orbiting the giant Vesta asteroid, or Japan’s Hayabusa probe, which actually brought back to Earth some pieces off the asteroid Itokawa in 2005. This means that if an asteroid would sometime in the future find itself on a collision course with Earth, than we would have the necessary means to diffuse it. However, the researchers involved in the study warn that such a solution should be applied only in the most extreme cases, when the asteroid is only months away, or else we might risk causing multiple asteroid fragments to hit the planet, as stated earlier.

The reseachers propose some new solutions. One would be to send a robotic probe to the asteroid, which would run along the surface of the asteroid constantly for months, even years, exerting a slight gravitation force, ultimately altering its course away from a threatening trajectory. Another option would be to crash a rendezvous craft into the asteroid using brute force to push it off course.