It’s one of the most emotional and disturbing space stories I have ever read; the Soviet cosmonaut is on the phone with Alexsei Kosygin, one of the highest officials, and he is crying because he knows he will die. Kosygin is crying to, because he too knows there is no hope. As Vladimir Komarov is about to crash into the Earth, perfectly aware of what is happening to him, U.S. listening posts in Turkey hear him crying in rage, “cursing the people who had put him inside a botched spaceship”.

Komarov was a very close friend of Yuri Gagarin, the first man to ever walk into space, and a national hero. In 1967, to celebrate 50 years Communist revolution, Brezhnev, the Soviet leader at the time, wanted to do something spectacular: he decided to stage a spectacular midspace date between two Soviet spaceships, as follows. Komarov was to be launched in a capsule, and a day from that, another capsule was to be launched, picking him up and bringing him to Earth – at the time, this would have been indeed quite an accomplishment. But the odds of succeeding in such an attempt were not good at all, and the two cosmonauts knew this. 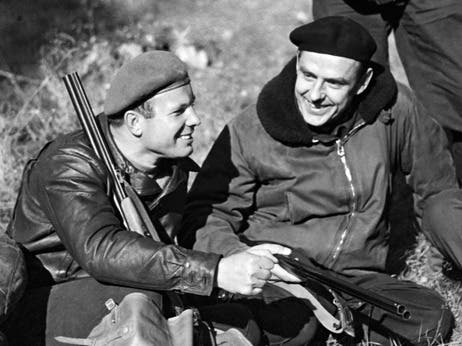 Gagarin and some technicians inspected Soyuz 1 and found 203 structural problems with it, thus suggested that the mission be postponed. Gagarin wrote a thorough 10 page memo and gave it to his best friend, a highly appreciated KGB officer named Venyamin Russayev. Absolutely everybody who saw that memo, Russayev included, was demoted, fired, or even sent to Siberia – postponing wasn’t an option; but the odds were slim. Komarov met with Russayev, now demoted, and told him “I’m not going to make it back from this flight”. Of course, Russayev asked why not refuse the mission. The answer is absolutely stunning.

“If I don’t make this flight, they’ll send the backup pilot instead.” That was Yuri Gagarin. Vladimir Komarov couldn’t do that to his friend. “That’s Yura,” the book quotes him saying, “and he’ll die instead of me. We’ve got to take care of him.” Komarov then burst into tears.

In the morning of the launch day, Yuri Gagarin came at the launch site and demanded to be put into the space suit, even though nobody was expecting him to fly, in an attempt to save his friend, but the Soyuz launched with Komarov on board. As soon as the Soyuz began orbiting the Earth, problems started to appear. First the power, then the navigation, then the antennas went down. Next day’s launch had to be canceled and the survival chances were already almost inexistant. Soviet premier Alexei Kosygin called on a video phone to tell him he was a hero – he was crying too. He then talked to his wife and discussed what to tell their children. Then it all went silent, and he was alone. He died crying, screaming and cursing the people who put him in that ship.

What he must have felt in those moments is easy to explain, but extremely hard to understand. But, given all the circumstances, in my humble opinion, he is a hero – because he acted like one.