The search for DNA on Mars 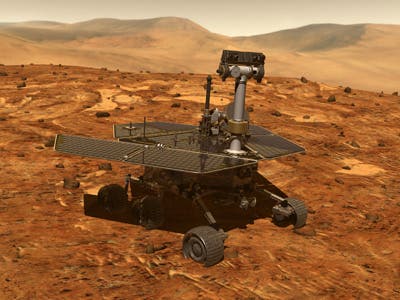 They came from Mars; they invaded our planet billions of years ago. But they were small, and came with rocks instead of spaceships. At least that’s what Christopher Carr from the Massachusetts Institute of Technology (MIT) thinks. He claims that sheltered within meteorite rocks, microbial Martians could have survived the cold dark space, and make it through to Earth, where they settled in. Even Carr admits the theory does sound a bit far fetched, but this idea has been gaining more and more support in the last years, especially since it is well known that Earth and Mars exchanged almost a billion tons of rock over time – most of them coming from Mars to our planet.

For this reason, he and his team over at MIT are developing a DNA detecting machine, to use with the 2018 Mars Rover; if they can make it work perfectly in time, it could destroy half of what we know about how life appeared on Earth, or fill the missing pieces we are missing from the puzzle. Finding DNA on Mars would mean that the planet held (and probably still holds life), and that there’s a very very big chance all life an Earth is related to it, or maybe even spawned from it.

The problem with projects such as this one is you have limited amount of time, money, and weight, so you have to choose only a handful of instruments to send, which means that there’s a good chance that even if constructed in time, the DNA seeker might not be sent into space, if NASA decides to do this. For me personally, this does sound extremely interesting, but I feel that it is not the upmost priority for the Mars Rover. Still, I have good faith the people over at NASA will make the right decision in due time.