by Mihai Andrei
in Astrophysics, Remote sensing, Space
Reading Time: 3 mins read
A A
Share on FacebookShare on TwitterSubmit to Reddit

I gotta say, sometimes it absolutely baffles me to see the kind of complex studies astrophysicists do, and this is definitely one of them. The light from the first stars in the Universe is still lingering around in the cosmos, and researchers have found a new way to capture it: using ultra-bright galaxies that act as cosmic beacons, capturing relict photons in a blaze of gamma rays. 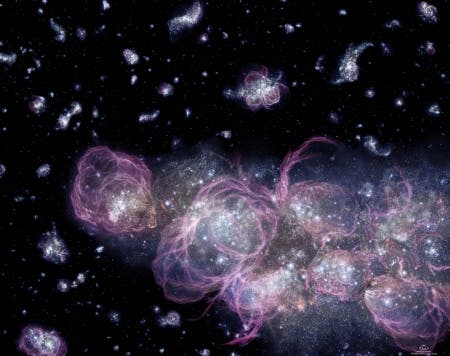 But it’s not just these early wandering photos that are captured – every light particle can be ensnared.

“We now have constraints on the total number of stars that ever formed,” Volker Bromm, an astronomer at the University of Texas at Austin, says of the new way to see old light, described online November 1 in Science. “It provides us with a review of the entire history of cosmic star formation, including the very first epochs of star formation in the very early universe.”

The biggest interest is finding out more about the early days of the universe and its first stellar inhabitants, which are currently too far from us to provide any information directly. Now roughly 13.7 billion years old, the universe is believed to have spawned the first stars some 4-500 million years after its birth. Studying these first stars would fill in some major gaps regarding what we know of the universe.

“Detecting these stars is very important but currently impossible,” says astrophysicist Marco Ajello of the Kavli Institute for Particle Astrophysics and Cosmology at Stanford and a coauthor of a the new study. “In this way, we are already able to set constraints on the amount and role of these stars in the early universe.”

Typically, it’s quite difficult to separate this relict starlight from every other object that’s shining; black holes, dust, other stars – all these and many more are just lurking around there, hiding the photon signature of primordial stars, and since we’re well inside the galaxy, there’s not much we can do about it.

“If we were located outside the Milky Way, then we could have measured the background light more easily,” says Avi Loeb, an astrophysicist at the Harvard-Smithsonian Center for Astrophysics. “We are embedded too deep inside the galaxy.”

To get around this problem, Ajello and his colleagues used the orbiting Fermi Large Area Telescope to study distant blazars, a type of bright, active galaxy. Like virtually all galaxies, blazars have supermassive black holes at their centers, but their black holes shoot out enormous jets of energy toward Earth. The jets include gamma rays, a high-energy form of radiation that interacts with the photons sent out by early stars. The photons interact with the gamma rays, and are converted into electrons and their antimatter equivalents – positrons. The transition produces a fade dimming effect, but one that the Fermi telescope can actually observe, and correlate it with the amount of photons between the source and the Earth.

Since blazars are relatively common and distributed throughout the entire Universe, astronomers use them to measure the photon fog at different ages, and calculate the contributions from early stars. So far, the initial results are quite promising; they show that early stars took more time to form than previously believed, and unlike today’s stars, which also hold heavier elements, early stars were made entirely of hydrogen.

“The first stars were in general more massive — up to hundreds of times as massive as the sun — hotter, brighter, and more short-lived.”