Why do snakes flick their tongues?

It's probably not what you think it is.

Despite popular belief, snake tongues have no receptors for taste or smell. However, they flick their tongues to collect chemicals from the air or ground, using the so-called Jacobson’s Organ in the top of the mouth. 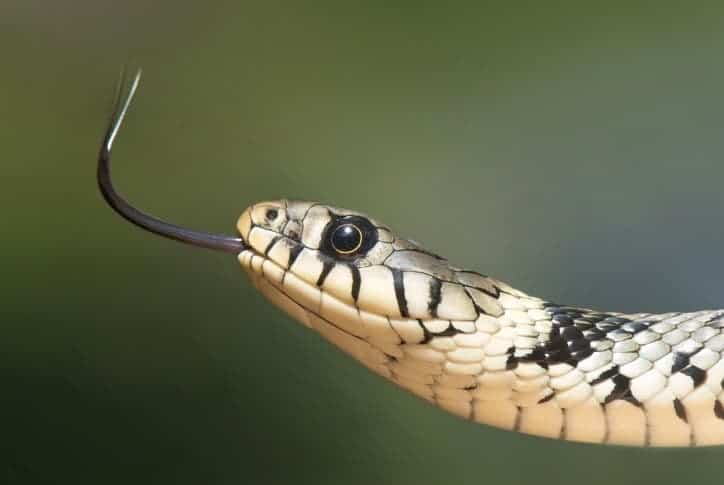 Snakes are terribly odd creatures, with their cold-blooded no-legs approach to life, but they’ve been around for over 100 million years, so they must be doing something right. Among the distinctive features of these elongated, carnivorous reptiles is their forked twin tongue.

Since the dawn of mankind’s interaction with snakes, we’ve noticed their eerie forked tongues flicking in and out — but why do they do it? Aristotle was seemingly fascinated by snakes and wrote about them on several occasions. Somehow, he managed to be very wrong, and yet also very close to the real answer. He wrote that “nature does not do anything in vain” and does “what is best among the possibilities,” something which is somewhat consistent with the principles of evolution. About the tongue, he wrote that it provides snakes with “a twofold pleasure from savors, their gustatory sensation being as it were doubled.”

In the 17th century, the idea that snakes catch insects with their tongue was popularized, and even though this has never been observed to be the case, it was still widely believed. However, this is true for other reptiles — most notably chameleons.

The Italian astronomer Giovanni Hodierna thought snakes use their tongues to clean dirt from their nose, which is a more reasonable explanation, though equally unlikely.

Two myths have also been perpetuated about snake tongues. The first is that they use the tongue to cover the prey in saliva before swallowing it. However, even a superficial investigation will reveal that the delicate tongue is neither well-suited or capable of such an act. The other myth is that it is a stinger, or the source of the snake venom, something which again, was disproven by autopsies since the Renaissance. This latter belief was probably popularized by quotes in the Bible and in Shakespearean literature. It’s surprising that so many myths still surround this phenomenon, but it’s probably understandable since snakes themselves are surrounded by a great deal of myth and folklore.

Why snakes really flick their tongue

A thorough investigation of snake behavior will reveal that through the tongue, the snake gets some understanding of its surrounding. This was determined by the investigations of French naturalist Bernard Germain de Lacépède in the early 1800s. Various 19th-century scholars have believed the tongue to be an organ of smell, taste, or even vibrations. However, these theories were displaced by thorough experiments.

More recent studies have learned that a snake tongue picks up particles or odors from the air. The two tips of the tongue are then introduced into the corresponding pair of what is called Jacobson’s organ, where they evoke different signals which are then transmitted electrically to the brain.

Keep in mind that this is neither a sense of smell nor taste — the tongue does not have receptors for smell or taste. It simply picks up the chemicals from the air or ground and passes them to Jacobson’s Organ. 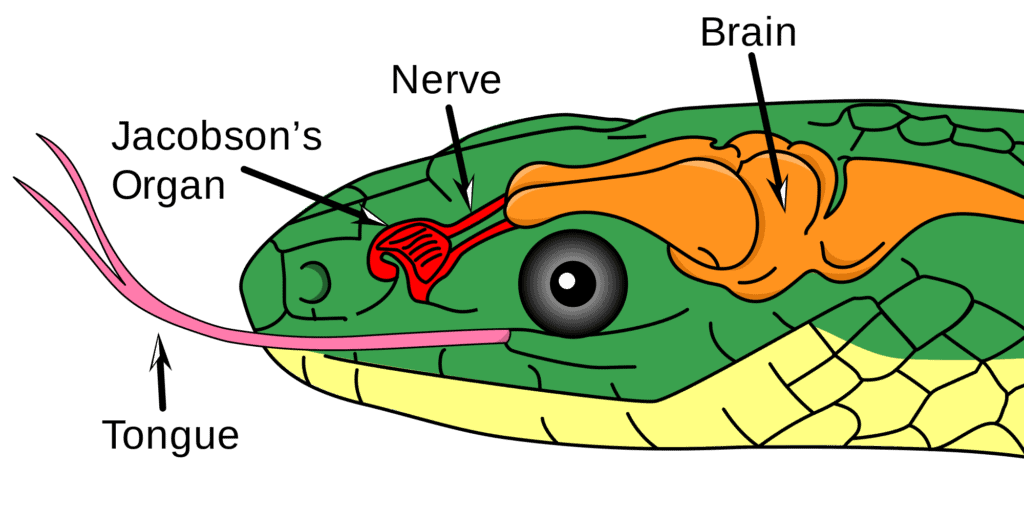 The organ (also called the Vomeronasal organ, or VNO) was actually discovered in the 18th century, but its purpose wasn’t properly understood at the time. The organ is mainly used to detect pheromones, chemical messengers that carry information between individuals of the same species. Snakes have very well developed Jacobson’s organ, which allows them to sense a wide variety of chemicals.

But snakes aren’t the only creatures to have this biological feature. Many mammals also have it, and it is typically involved in the so-called flehmen response — a behavior in which an animal curls back its upper lip exposing its front teeth, inhales with the nostrils usually closed and then often holds this position for several seconds. The flehmen response is often used by horses and cats. However, oscillating tongue flicks are unique to snakes.

In humans, the VNO remains an area of active research and a controversial subject. The presence of vomeronasal organ has been observed in fetuses, though several studies found that it regresses as the fetus develops. It’s unclear if the VNO continues into adult life, as some studies have found evidence of it, while others have not. Furthermore, even if it does exist, it’s not clear that it is active and functional — even though chemical communication has been proven to exist between humans.

So, snakes flick their forked tongues to pick up chemicals from the air or from the ground, something which is akin to smelling but is really not the same as smell. But this doesn’t really tell the whole story.

Advanced features of the snake tongue 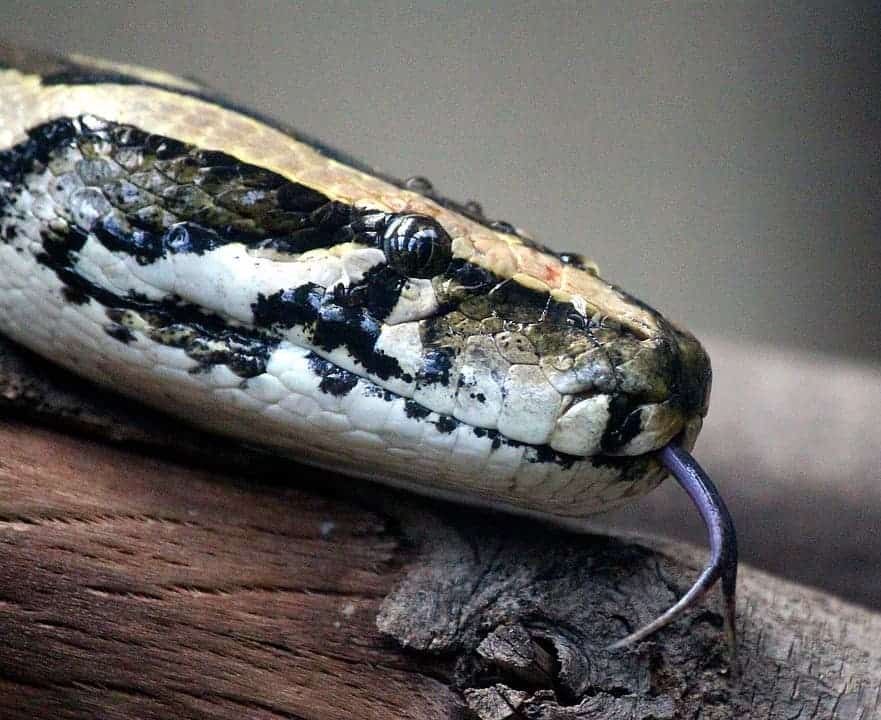 While this explains why snakes flick their tongue, we still haven’t discussed why their tongue is forked — and there’s a very good reason for it.

Because it is forked, it can collect information in two places at once. This allows the snakes to create a chemical gradient of sorts, which gives them a sense of direction. In other words, snakes use their forked tongues to navigate the chemical world in 3D. It’s the same principle with owls, who developed asymmetrical ears to collect sounds in 3D. This makes it much easier for snakes to pick up and follow trails left behind by other animals.

This theory was confirmed in the 1930s, in an age before the ethical use of animals in research was regulated. German biologist Herman Kahmann cut off the forked parts of a snake tongue. He found that while the snakes were still efficient at picking up chemicals, they were much less able to follow trails.

More ethical studies have shown that the snake is effective in following not only the trail of potential prey — but also that of mates. In the 1980s, snake biologist Neil Ford at the University of Texas at Tyler followed male garter snakes as they were chasing the trail of females. He found that if both tips of the male tongue fall within the trail left by the female, the snake continues his route. But if one side falls outside of it, the snake turned his head away from that side, accurately following the female trail. Snake ecologist Chuck Smith at Wofford College also found that male Copperheads have longer, more deeply-forked tongues than females, which seems to support this theory.

Also, it was once thought that since Jacobson’s organ is forked just like the tongue, the tongue delivers the chemicals directly to the organ, but X-ray videos have revealed that this is not the case. It seems that the tongue simply deposits the chemicals on the bottom of the mouth, and when the mouth closes, the bottom and the top of the mouth, where Jacobson’s organ is located, come into contact.

Odor dispersion and how it is picked up by different creatures is still an area that’s poorly understood. While we can now say we truly know why snakes flick their tongues, the intricacies of this process are still not fully understood, and future studies will no doubt reveal even more about the impressive creatures we call snakes.