by Mihai Andrei
in Animals, Geology
Reading Time: 2 mins read
A A
Share on FacebookShare on TwitterSubmit to Reddit

Researchers have discovered what they believe to be a grandfather of snakes, which descended from terrestrial rather than marine ancestors.

“It’s the missing-link snake between snakes and lizards,” says Nicholas Longrich, a postdoctoral fellow in the geology and geophysics department at Yale University and the lead author of a paper published in the journal Nature.

The paper argues that snakes developed from terrestrial ancestors once lizards developed long, limbless bodies for burrowing. The snake in case has a serpentine body but a lizard like head, and it represents one of the extremely few fossils which showcases a transitional life form, shedding light on the divergence of snakes from the broader family of lizards. 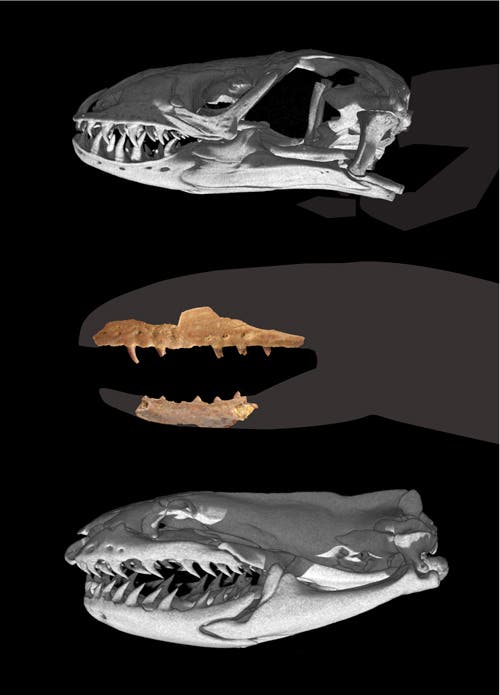 Snakes today have jaws that unhinge, thus allowing it to swallow preys much larger than themselves; in contrast to modern snakes, this ancient one, Coniophis precedens, has jaws that remain fixed, limiting his dient which probably consisted mostly of small reptiles and amphibians.

“It moves like a snake, but it doesn’t feed like a snake,” says Longrich, who notes Coniophis‘ body is made up of vertebrae characteristic of snakes, allowing it to slither “beneath the feet of T. rex.”

For more than a century, researchers had only a single isolated Coniophis vertebra, and hardly anything was known about its anatomy or lifestyle, much less his place in reptilian evolution. Longrich and colleagues established a more detailed picture, pinning down an important piece of the puzzle, after analyzing some smaller bones which had previously been gathered, but not studied.

The additional bones, which were basically pieces of upper and lower jaw, teeth, and additional vertebrae were found in several museum collections, including Yale’s personal one. What’s interesting is that even though paleontologists believe snakes evolved from Coniophis, it is not the oldest snake ever found – being a living fossil in its time, co-existing with other, more evolved snakes, much like humans and chimps today.