What Are Five Stages of Mitosis?

Our bodies are collections of cells, all bunched up and working together to help you successfully navigate adult life. Being the ideal heap of cells, however, involves some growing and quite a lot of maintenance. If it sounds like hard work, it’s because it probably is. Luckily for us, cells have a secret ace up their sleeves: they can simply copy-paste themselves to create new, identical members. This process — called mitosis or, more colloquially, cell division — is what allows organisms to grow, develop, and heal with virtually no conscious effort.

I’m a huge fan of not making any conscious effort — so let’s all appreciate all the work our cells aren’t putting us through while we take a look at mitosis.

Readers be warned: we will be using the animal cell as a template to discuss the processes involved. There will be some differences here and there between how these and other types of cells handle mitosis.

Mitosis is one of two types of cellular division — the other being meiosis. They’re largely identical, with the key difference being that mitosis results in two daughter cells, each with the same number and type of chromosomes as their parent, while meiosis results in cells that only have half of the parent’s chromosomes. Mitosis is how regular cells — the ones that make up your tissues, your pet’s tissues, or the yeast that fermented your beer — multiply. Meiosis is how our bodies produce sex cells, like sperm and eggs.

While it goes on without us actually doing anything (beyond staying fed and not-dead, obviously), there’s a lot of work involved in mitosis. We’ve classified the steps of this process in ‘phases’ that each cell must go through before it can divide. These are, in order: 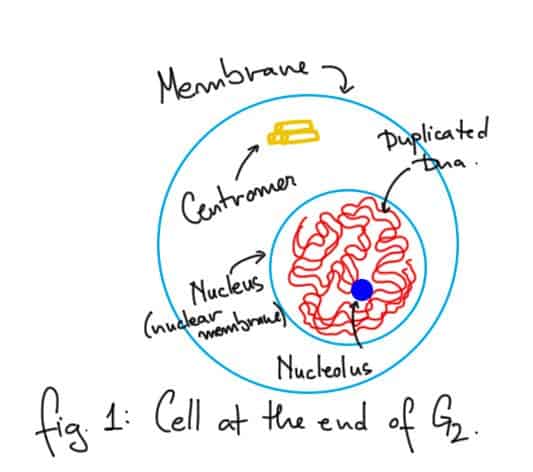 This isn’t strictly speaking part of the meiosis process; rather, it’s more of a default-state for cells. They spend most of their lifespan in interphase, performing their usual functions and getting all stocked up on nutrients. As baby-cell-making time swings around, i.e. the later stages of interphase, cells start duplicating their internal structures — they create two copies of their DNA and of each organelle.

Interphase is generally broken down in two to three separate sub-phases: 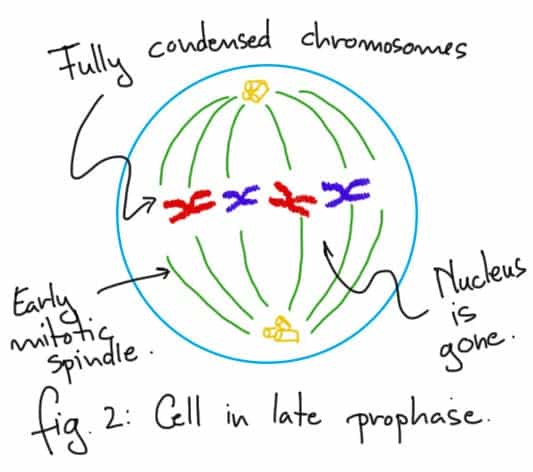 This is when the cell starts going into reproduction mode proper. One of the first things that happen during prophase is that the cell’s (now double-helping of) DNA condenses into pairs of chromosomes. Think of it like archiving a folder on your computer — all the information is still there, only much more compact and easier to share with your kids.

Another important event is the formation of the mitotic spindle. This starts with the cell’s centrioles — the organelles that secrete these microtubules, made from the protein that forms the spindle and cellular support skeleton — moving to the poles. From there, they release microtubules, gradually pushing them towards the middle, where they’ll eventually fuse. The mitotic spindle will elongate the cell during prophase, which will come in handy during division.

Finally, the cell’s nucleolus — the largest structure inside the nucleus, which assembles ribosomes — disappears, setting the stage for the nucleus to break down. 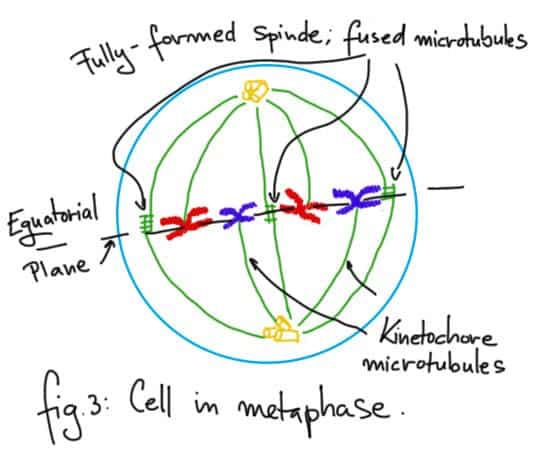 During a brief time window called prometaphase (the “before metaphase”), the membrane around the chromosomes breaks down. This will release the chromosomes inside the cell, and they will affix to the mitotic spindle on the equatorial plane.

The spindle is there to ensure that each daughter cell will receive a full copy of the original’s DNA. It does this by pulling the chromosome pairs onto its filaments, right across the equatorial plane — an imaginary line that falls roughly along the cell’s midline. This sorts the genetic data, so to speak, ensuring that each of the new cells-to-be will get one chromosome from each pair before the cell divides. Not all microtubules stick to a chromosome — those that do are known as kinetochore microtubules. The other microtubules will span the cell and grab on to microtubules coming from the other side, to stabilize the spindle.

During metaphase proper, all chromosomes are drawn into place on the spindle across the equatorial plane. By this time, each chromosome’s kinetochore — a complex protein structure associated with the chromosomes that, among other things, contains a molecular motor — should be attached to microtubules from opposite spindle poles.

Eukaryotic cells go through a lot of effort to ensure genetic integrity during mitosis — else they risk their health and that of the organism. Before proceeding to the next phase, the cell has to pass the ‘spindle checkpoint’: if all chromosome pairs are on the equatorial plane, and properly aligned (one half toward each end of the spindle), the cell gives the green light. If not, it pauses the mitosis process until everything is set. 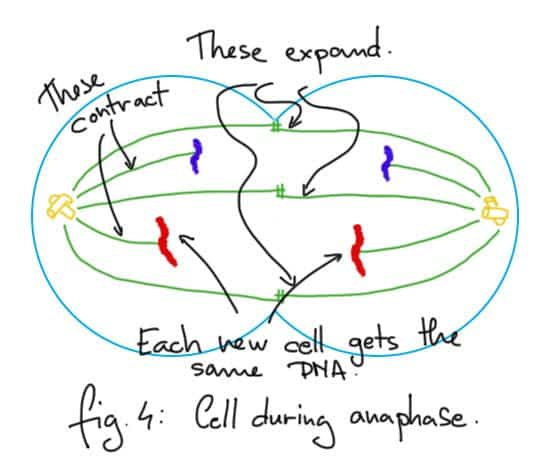 During anaphase, the ‘glue’ holding each chromosome pair together breaks down and their members get pulled to the opposite sides of the cell — by this point, each half of the mother cell harbors a complete copy of its DNA, and the actual division can begin.

The chromosomes are pulled by kinetochore microtubules, which start to shorten towards the opposing centromeres. At the same time, the structural microtubules grow, pushing at each other, elongating the cell; imagine stretching a piece of chewing gum between your fingers — that’s roughly the shape cells take during this phase. All this activity is powered by motor proteins, such as the one in the chromosomes’ kinetochores that pull them along microtubules. 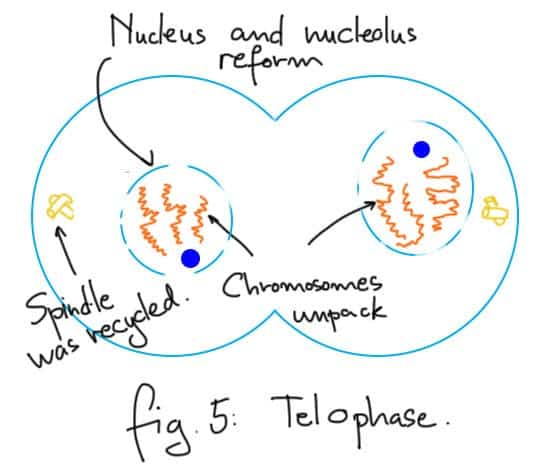 By this point, the cell is nearly done dividing, hurray!

Since cells are really a tidy lot, the new daughter cells start re-forming their internal structures even while they’re still connected along the membrane. The mitotic spindle is the first structure to be broken down, its building blocks recycled into the new cells’ support skeletons. Each set of chromosomes comes together, and the nuclei form, fully-equipped with their own membranes and nucleoli.

Finally, the chromosomes begin to unpack, reforming into long strands of DNA in the nucleus. 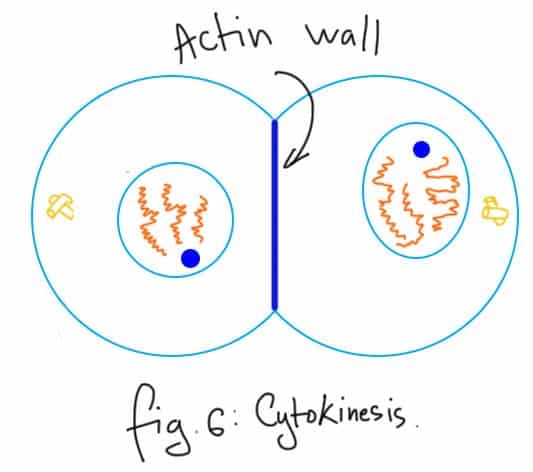 Sometimes considered as the later part of telophase, this stage sees the division of cytoplasm (the gooey stuff inside cells) between the two daughters. Cytokinesis can actually start as early as during anaphase (most notably for certain plant cells) but always ends shortly after telophase.

In animal cells, the process of cytokinesis constricts their membranes where they meet — like a piece of string tied around a balloon. That string is a band of actin filaments. The goal of this contraction is to progressively pull the membranes into an ‘8’ shape, after which the cells pop free of each other.

Plant cells, which tend to reinforce their membranes with compounds such as cellulose and hemicellulose, don’t employ the same mechanism. Instead, they form a structure called a cell plate down their middle, splitting the two daughter cells with a new wall.

And voilà! Two new cells, identical to their parent, are now ready to mingle and toil for the collective good.

Despite all the checks and balances biology set in place to make sure mitosis goes through smoothly, sometimes it doesn’t. For cells, any errors that take place during mitosis can have significant effects. For us, multicellular organisms that we are, not so much — but it can still affect us.

One of the most abhorred outcomes of bad mitosis is cancer(link). Faulty copies or improper distribution of chromosomes during mitosis can induce genetic errors, which can cause mutations in daughter cells. Some mutations are silent (they don’t have an impact on the sequence’s role) but those that alter amino acid synthesis (called missense mutations) often have an impact on the cell’s workings. Over time, enough such mutations can add up, disrupting the cell’s normal activity, leading to the formation of tumors. Cancer occurs when mutated tumor cells override their natural limits and checks on mitosis, starting to reproduce uncontrollably.

Another way mitosis can go awry are chromosome abnormalities(link). In short, sometimes the chromosome pairs fail to attach to the spindle, and a daughter cell will end up with an extra or a missing chromosome after division (a condition known as aneuploidy). This error can have far-reaching effects on the body. For context, Down’s syndrome is caused by the presence of an extra chromosome in every cell — it arises from aneuploid sperm or eggs, so it’s a meiotic, not a mitotic error. Still, it illustrates what a body-wide difference of a single chromosome can do. Meiotic chromosomal abnormalities generally only affect one or a small number of cells, based on random mutation.

Cell mutations can also lead to mosaicism(link). This describes a condition in which some cells in the body have a mutant version of a gene, while others carry the normal version. In somatic cells (your body’s cells, bar your eggs or sperm) these mutations generally don’t even produce a noticeable effect. But, if the mutant gene is widespread enough, and is missense, it can have a major impact. Two examples of conditions linked to mosaicism are hemophilia, a blood-clotting disorder, and Marfan syndrome, which produces unusually long limbs.