Dr. Milton Wainwright is trying to convince the world that the found alien life floating some 25 miles in our planet’s atmosphere – but while tabloids gobbled up his story like no tomorrow, the scientific community is much more reluctant to accept his results. Is there any truth to these claims? Let’s have a look. 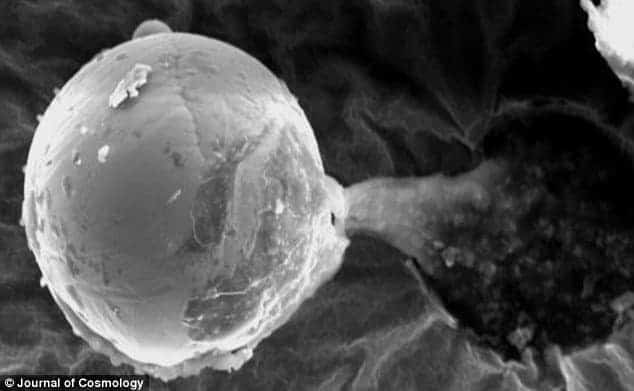 If you’d actually find life at 25 miles (about 40 km) above ground, that’d be really something spectacular. Jets don’t fly that high, and only powerful volcanic eruptions might spew living cells that high (though that’s also debatable) – but there was no volcanic eruption that could account for his discovery; so if something were in fact floating that high, it would truly be worth investigating – so why aren’t scientists all over this?

Well first of all, the professor is a bit controversial, to put it lightly. Dr. Wainwright, a microbiologist who works at the University’s Department of Molecular Biology and Biotechnology, has been trying to convince the scientific community that Earth has become some sort of target for aliens, who are planting tiny living probes in our atmosphere. The organisms, he claims, are contained in a microscopic metal globe designed by an intelligent species to ‘seed’ alien life on Earth. Needless to say, that didn’t fall quite right on the ears of researchers, so he took a different approach.

He emailed his results to his students – and some of them posted it on social networking websites, including Reddit, as you can see below 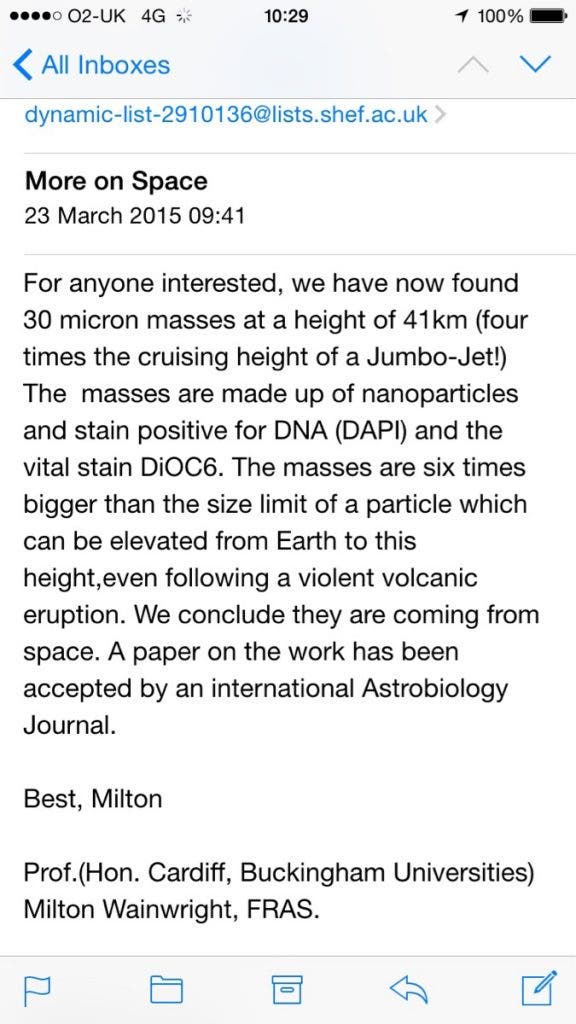 Clearly, that’s an effective way of communicating your ideas, though not a very scientific one at that. So why is it that most people don’t believe him? Well, his research offers proof that is questionable and flimsy. Furthermore, his studies have been published in the Journal of Cosmology, which has been criticized for its dubious peer-review process (and, I might add, for its disturbing ’90s design).

‘The critics claim that the samples we obtained must have come from Earth, that it that there must be a mechanism which can lift these particles from Earth to the stratosphere,’ Dr Wainwright explained. ‘However, we have provided evidence that the DNA-containing masses, plus other strange organisms we have isolated are not associated with pollen, grass and fungal spores on our sampler. ‘If our organisms came from Earth they must be contaminated with common Earth organisms and they are not.’

According to his statements, the organisms test positive for DNA, and have masses that are ‘six times bigger than the size limit of a particle which can be elevated from Earth to this height.’ He also claims to have double checked for any signs of potential contamination, using high-altitude balloons.

‘We sent balloons and a sampler and found no pollen or grass, nothing up there to contaminate, it was completely pristine,’ Dr Wainwright told Jason Koebler at Motherboard. ‘For these reasons, we think [the organisms] are coming from space,’ he added. ‘All the time when you walk outside, you are being pelted with organisms that come from space.’

It’s not the first time Wainwright reported something like this. In 2013, he found the same thing floating 16 miles above ground, and earlier this year, he released an image of what he said was a tiny metal ball spewing out a ‘gooey’ substance in samples gathered by a balloon in the Earth’s stratosphere. But his research was neither approved nor acknowledged, and no one managed to recreate his results – though to be perfectly honest, no one has actually tried. Is it a case of science-gone-wacky, or is he really on to something? I really don’t know.

I’d really like to see someone at least try to do it; sure, it seems highly questionable that aliens are sending encapsulated life in an attempt to plant the seeds of life on our planet… but wouldn’t you want to check? But then again, I hate it when people (especially scientists) jump to rash conclusions. Great claims require great proof, and so far, Wainwright simply hasn’t provided any.