by Tibi Puiu
in Robotics 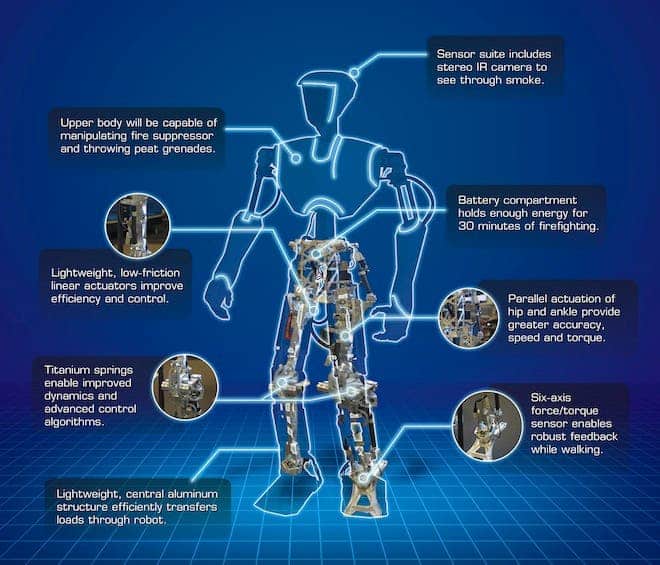 Once flames brake loose, the close confinements of ships or subs suddenly transform into a hellish scene, claiming the lives of countless sailor. The U.S. Navy seeks to counter this deadly hazard by employing a mechanical firefighter among its ranks. Sophisticated, robust, and dexterous, this is a highly exciting project.

Developed by the Naval Research Laboratory,  the Shipboard Autonomous Firefighting Robot (SAFFiR) interacts with its environment and is able to walk just like your regular sailor. Equipped with sophisticated sensors that provide ongoing environmental feedback, finger and hand human-like coordination, which allow the robot to wrestle fire hoses into place or accurately throw extinguisher grenades, smoke penetrating infrared cameras, a battery which allows for a half an hour worth of firefighting autonomy, and coupled with the fact that SaFFiR isn’t really alive and doesn’t mind that much smoke and fire, makes the Navy’s mechanized firefighter one of the most interesting robotic project to come off a military spin-off in a while.

A first test for the firefighting robot is scheduled to take place aboard a decommissioned Navy dock landing ship, the Shadwell, in late September 2013. Though still a long way from commissioning, the SAFFiR firefighter promises to be a real life saver.