by Tibi Puiu
in Other, Videos
A A

In 1996, hundreds of US Air Force specialists, scientists and affiliates established an extensive study called Air Force 2025, in which the emerging technologies that will shape the battlefield in the next 25 years were outlined. The study went pretty well, since it was continued with Blue Horizons in 2007, in the same lines, which eventually transformed into a series of annual long range vision studies.

The studies themselves are extremely interesting, and the forward vision of the Air Force is remarkably impressive, as it discusses both threats (with an apparent emphasis on cyber war) and how the innovative tradition and resources of the Air Force can benefit the civilian populace at peace time. Similarly, the Air Force also released Energy Horizons, a vision study which  measures the institution’s plans to meet in order to reach its energy goals, reduce demand and change military culture in sight of rapidly developing missions.

Now, the studies themselves, which are publicly available, make for an interesting lecture, especially for those of you passionate about military technology and security; however, something else caught my attention. Apparently, the Air Force produced a short, fast paced, action thriller …heck I don’t even know what to call it , and released it on the web via YouTube.

The video itself, a spin-off from the Blue Horizons missions and titled “Welcome to 2035… the Age of Surprise”, is exactly the panicking sort of production you’d expect NOT to see from behalf of a governmental institution. Now, I won’t go down to how all the typical Hollywood dime a dozen action movie trailer elements are present here, from low attention span graphics to bombastic bylines to cheap national pride inserts. It’s the actual message, white on black, that’s conveyed and is of particular interest to me. Here it is, since the Air Force believes spelling it as fitter. 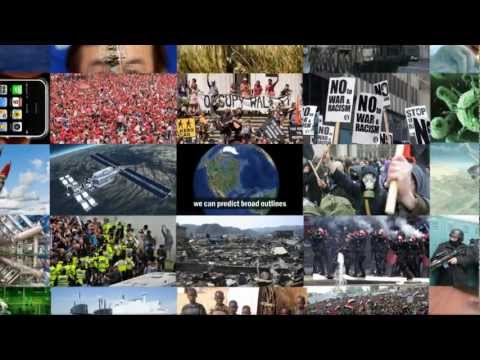 “We can predict broad outlines, but we don’t know the ramifications,” the video says. “Information travels everywhere; anyone can access everything — the collective intelligence of humanity drives innovation in every direction while enabling new threats from super-empowered individuals with new domains, interconnecting faster than ever before. Unlimited combinations create unforeseen consequences.”

There you have it folks. A take-down justification of the Air Force’s budget to the American public, complete with iPhones, iPads, iTerrorists and of course face facebook and youtube. Enough of me, discuss.