A clever and entertaining vessel designed by Pythagoras himself to hold an optimal amount of wine, forcing people to imbibe only in moderation - a virtue of great regard. If the user was too greedy and poured wine over the limit, the cup would spill its entire content.

by Tibi Puiu
in Physics 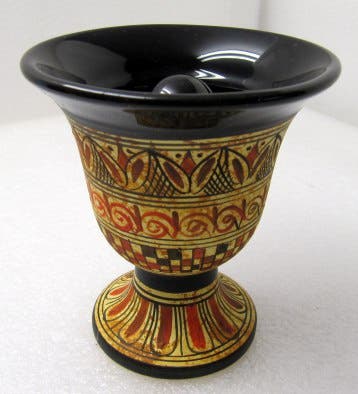 Known as one of the most enlightened mind of antiquity, Pythagoras of Samos left an invaluable legacy to the world. Famous mathematician, philosopher and mystic, Pythagoras’ ideas exercised a tremendous influence in the ancient world, some living on to this day.

The ancient Greek was also an accomplished inventor. One such invention is the Pythagorean or Greedy Cup – a clever and entertaining vessel designed to hold an optimal amount of wine, forcing people to imbibe only in moderation – a virtue of great regard. If the user was too greedy and poured wine over the limit, the cup would spill its entire content. Imagine the dismay and stupefaction a glutton felt when his precious brew perished on the floor.

Indeed, Pythagoras was a man keen on making lessons, and his contraption may have taught a couple of fellows about the virtue of moderation. The ‘greedy cup’ also gives a lesson in ingenuity, however. On the outside, the 2,500 year old design looks like any other cup, if you make a cross-section, though, you begin to understand it works differently. At the center of the cup lies a mechanism consisting of a hollow pipe-like chamber that follows an opening, starting from the bottom of the liquid-holding part of the cup, up to the top of the central column that makes up the cup’s core, and back down 180 degrees, out the bottom.

As the pipe curls over the top of the central column, its floor marks an imaginary line of sorts. If you fill the cup over this horizontal line, liquid will begin to siphon out the bottom and onto your lap or feet – all of the cup’s content!

This phenomenon called the siphon is created due to a reduction in pressure at the higher end of the siphon. As gravity pulls the water column down the pipe of the Pythagorean cup, the lower pressure thus created on the other end causes the liquid there to be overpowered, subsequently allowing itself to be “dragged” along, stopping only when the water level either falls below the intake, or the outlet. Some modern toilets operate on the same principle: when the water level in the bowl rises high enough, a siphon is created, flushing the toilet.

Today, Pythagorean cups can be bought all over Greece at souvenir shops and can even be ordered on eBay. If you’re up for pranks, this is a great toy to send your friends (be weary of wine though, since it stains).