by Tibi Puiu
in Physics, Technology
Reading Time: 2 mins read
A A
Share on FacebookShare on TwitterSubmit to Reddit

Spintronics, or spin transport electronics, is a sort of emerging technology that scientists have been studying for a while in an attempt to leverage the encoding posibilities in an electron’s spin, in addition to its electrical charge. Recently, researchers at IBM Zurich have made a huge leap forward in turning spintronics into a viable technology for commercial solid-state memory devices implementation. Their findings show a 30 times increase in stability, compared to previous attempts. 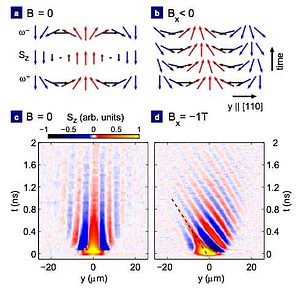 Conventionally, information is stored and read from the electrical charge of electrons. In the case of spintronics, electron spins can be used to represent data, with a shift in orientation corresponding to either a one or a zero dictated by a magnetic field. However, this is a forefront technology still in its infancy, with previous research that couldn’t make a conclusive claim whether electron spins could actually preserve encoded information for long enough before rotating – until now.

The IBM scientists synchronizing electrons extends the spin lifetime of the electron by 30 times, up to 1.1 nanoseconds, or the same time it takes for an existing 1 GHz processor to cycle.  To achieve this, the researchers locked the electrons in what’s called a “persistent spin helix”, which allowed them to monitor in a constant fashion the electron movement – otherwise the erratic spin of the electrons would have made their efforts useless. This movement is then tracked using ultra-short lasers, allowing monitoring for a much longer time than previously attempted, signifying a big step towards an electronically programmable spin-based transistor.

As a metaphor, the IBM scientists  see this technique very similar to a couple dancing the waltz.

“If all couples start with the women facing north, after a while the rotating pairs are oriented in different directions. We can now lock the rotation speed of the dancers to the direction they move,” explains IBM’s Dr Gian Salis.

“This results in a perfect choreography where all the women in a certain area face the same direction. This control and ability to manipulate and observe the spin is an important step in the development of spin-based transistors that are electrically programmable.”

It might take some time, though, before this breakthrough can be transferred on the commercial market. For one, the researchers were  unable to perform the extended spin tracking at higher temperatures; to be more precise, this particular study of “waltz” electron movement was tracked at very low temperatures of 40 degrees Kelvin or -233 degrees Celcius. A bit far fetched from your typical room temperature. Still their findings are very much impressive, and will undoubtedly serve as solid building ground for future research.

Findings were presented in the journal Nature.