by Mihai Andrei
in Materials, Science
Reading Time: 2 mins read
A A
Share on FacebookShare on TwitterSubmit to Reddit

Is there something that graphene can’t do? It’s the world’s strongest material, even when it has flaws, a graphene aerogel is also the lightest material known, it’s great for sensors, for headphones, it repairs itself, and boasts a swarm of other features and capabilities. Now, researchers from Manchester University have shown that they can create elementary magnetic moments in graphene and then switch them on and off. 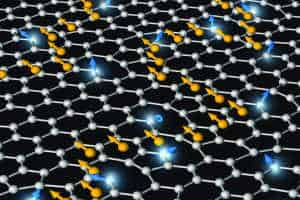 This is the first time, with any material, that magnetization was swtiched on and off, instead of on and then reversed – which makes the prospects even more intriguing.

Modern society is so dependent on magnetic materials we can’t even imagine the world without them. Everything we do depends on them – be it hard disks, memory chips, or airplane navigation. When it comes to graphene, its magnetism is a little unconventional – whenever atoms are removed from its lattice, microscopic holes called vacancies appear – the physicists from Manchester have shown that electrons condense around these holes into small electronic clouds; each of these clouds behaves like a microscopic magnet carrying one unit of magnetism, spin. Dr Irina Grigorieva and her team have shown how to turn this magnetism on and off.

“This breakthrough allows us to work towards transistor-like devices in which information is written down by switching graphene between its magnetic and non-magnetic states. These states can be read out either in the conventional manner by pushing an electric current through or, even better, by using a spin flow. Such transistors have been a holy grail of spintronics.”

Dr Rahul Nair, who was in charge of the experimental effort, explained why this is such a big deal:

“Previously, one could only change a direction in which a magnet is magnetized from north to south. Now we can switch on and off the magnetism entirely. Graphene already attracts interest in terms of spintronics applications, and I hope that the latest discovery will make it a frontrunner.”

Nobel Laureate and co-author of the paper Professor Andre Geim, who discovered graphene as a material concluded there is much reason for optimism:

“I wonder how many more surprises graphene keeps in store. This one has come out of the blue. We have to wait and see for a few years but the switchable magnetism may lead to an impact exceeding most optimistic expectations.”