Captured: first ever images of atom moving inside a molecule

by Mihai Andrei
in Physics
Reading Time: 2 mins read
A A
Share on FacebookShare on TwitterSubmit to Reddit

A Romanian scientist working at the University of Ohio captured the first-ever images of atoms moving within a molecule by applying a novel technique which basically turns the electrons of a molecule into flashbulbs; while this is currently only a new way to visualize molecules, researchers believe that one day it will be the key to controlling chemical reactions at an atomic scale. 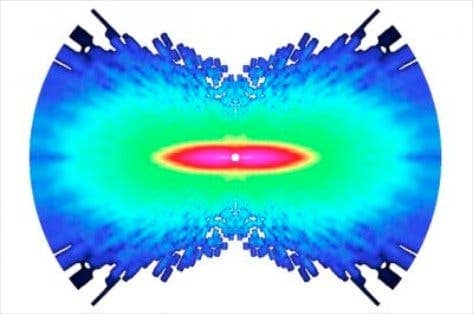 The photos were taken using a hi-tech laser, which fired 50 femtosecond pulses at the molecule, in a successful attempt to knock down electrons outside the outer shell; the strayed electron then comes crashing down to the molecule, and in doing so provides the kind of illumination scientists need to illuminate the setting. A femtosecond is a quadrillionth of a second.

By measuring the scattered signal of the knocked out electron as it collides with the molecule, they were able to reconstruct the molecule’s elements, including the positions of the atom nuclei. What’s just as spectacular is that due to a short lag between when the electron is knocked out and when it crashed into the molecule, researchers were able to capture the atom’s movement during that short period – practically creating a frame-by-frame motion picture of the nuclei and electrons.

For their experiments they used simple, oxygen (O2) and nitrogen (N2) molecules, especially because their molecular structures are so well understood. The next steps involve using more and more complex atoms, eventually improving what we know of the molecular structure from these studies, and ultimately being able to control chemical reactions at an atomic level