There's three things every good alien movie needs, in my opinion: aliens, spaceships and tractor beams; so far, science hasn't really delivered well on the "alien" part, and our spaceships still have a way to go. However, recent work in the UK might pull the third element out of the realm of sci-fi into reality.

by Alexandru Micu
in Inventions, News, Physics
A A

There’s three things every good alien movie needs, in my opinion: aliens, spaceships and tractor beams; so far, science hasn’t really delivered well on the “alien” part, and our spaceships still have a way to go. However, recent work in the UK might pull the third element out of the realm of sci-fi and into reality.

Engineers from the University of Bristol have designed and built a “sonic tractor beam” using a simple set of loudspeakers that can levitate and move objects in midair. It’s still in an early proof-of-concept stage but should the technology be refined its uses — from medicinal procedures, such as non-invasive surgery or treatment of kidney stones, to simulating gravity in space stations — would only be limited by our imagination.

Levitation in itself is not new; it’s not even the first time scientists used sound to levitate objects — what we perceive as sounds are actually pressure waves that hit the eardrum with enough force to move it, the tiny bones that reside in our inner ear, and vibrate our skulls. The sonic tractor beam uses higher, more powerful frequencies than human hearing can pick up on, blasting them from loudspeakers in a very precise configuration so that the sound waves can combine into what the team describes as a “sonic scaffolding” — known as an interference pattern — to hold a small object suspended.

Well, previous attempts at sonic levitation required the usage of several banks of speakers, placed on opposite sides of the object to be moved or a bank of speakers on one side and a sound reflector on the other — more of a sonic shelf than a tractor beam. The team’s study, published in Nature Communications, details how the team managed to achieve levitation using a single block of speakers on a single side of the object by employing a special algorithm that calculates the interference patterns required to manipulate the object using a “single-sided emitter” — they can lift the object, move it laterally, vertically and even rotate it, something that previous devices couldn’t do. Moreover, the one-sided speaker setup allows for easier access and more precise control of the floating object. 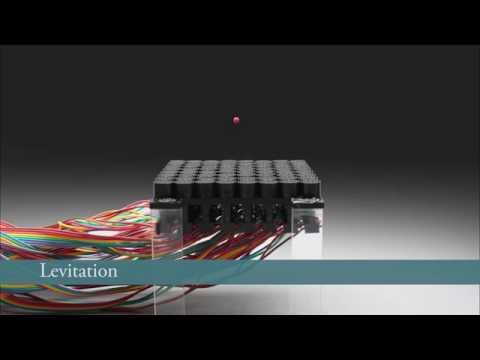 “It’s hard to get across how many times we tried and failed,” says Bruce Drinkwater, a mechanical engineer at University of Bristol and lead author of the study. “You’ve got this array of loudspeakers and you’re continually popping particles where you think they should levitate, and then watching them continually drop down.”

Using the new algorithm however, Drinkwater and his colleagues were able to dictate the bead’s motion, whether it hung in the air, spun on its own axis, or danced from side to side.

“After we got the [algorithm] working, we put [the bead] in and it just stayed there—it was absolutely amazing”

The software constructs interference patterns that not only hold the object floating, but also allows it to move, twist and rotate with some freedom. These patterns are created by adjusting the phases of the sound waves from each speaker, timing them just right to reinforce one another in one point and cancel themselves out in another. This way a three dimensional pattern of high and low pressure points are created, which the team named an “acoustic hologram,” strong enough to fight the Earth’s gravitational pull on a small item. To move it, the researchers simply use the algorithm to tune the phases, changing the shape of the hologram and allowing the object to move through the new low pressure points.

So far, Drinkwater’s team focused on three acoustic holograms, the “twin trap,” allowing for rotation and movement of the bead, the “vortex” which spins and entraps the bead in a spinning, tornado-like structure and the “bottle,” used to keep an item stable in a sonic container, but the algorithm can create many more spatial configurations.

“Not many people work in this field, and not many people recognize the importance of it,” says Tony Jun Huang, mechanical engineer at Pennsylvania State University, University Park, unaffiliated with the study.

Now Drinkwater joined forces with Asier Marzo, first author and computational engineer at the University of Bristol, to try and bring the technology to bear in medicine.

“My main target for the future is in vivo levitation,” Marzo says. “This isn’t just theoretical anymore,” Marzo says. “Now we have proof that we can do one-sided levitation and that paves the way for lots of other research.”

As ultrasonic waves penetrate the living tissue relatively gently, Marzo thinks that the sonic tractor beam has promise for procedures such as the  removal of kidney stones and clots, delivery of drug-laden capsules to various parts of the body, or control of microsurgical instruments.

But the real question is, how soon can they make a remote that levitates stuff to you? I’d never get out of bed again.