by Tibi Puiu
in News, Physics
Reading Time: 2 mins read
A A

Mechanical engineers have devised a clever technology that can levitate and move individuals particles using ultrasonic waves. Although the technology is still in its infancy, this powerful proof of concept suggests that it might one day be possible to perform surgery acoustically instead of using lasers which can destroy cells and healthy tissue.

Acoustic levitation isn’t exactly new. Scientists have demonstrated it in various forms in labs across the world and you can find a lot of very entertaining videos on YouTube.

What’s different about the new research is that scientists have now levitated and moved particles independently from one another for the very first time. Previously, acoustically levitated objects behaved in the same way.

[panel style=”panel-success” title=”How acoustic levitation works” footer=””]Objects can be levitated acoustically by blasting ultrasound waves from a transducer, which bounce off a reflector. The interaction between the bounced-off compressions creates a standing wave which shifts back and forth or vibrates in segments rather than traveling from place to place. Essentially, the standing wave cancels out gravity and the object between the transducer and reflector appears to float.[/panel]

The team of researchers at Universidad Publica De Navarra in Spain and the University of Bristol in the UK have called their technology “Holographic Acoustic Tweezers” (HOT). The name plays on the wording of Holographic Optical Tweezers (HAT), an increasingly popular method for applying precisely controlled forces to microscopic object.

The researchers hope that their method will one day replace HAT, whose main downside is that it can kill cells that are being moved. HOT, on the other hand, can apply the same forces but with less energy, ensuring safer cellular manipulation.

For their demonstration, the researchers designed an algorithm that controls an array of 256 small loudspeakers that work together produce acoustic fields. These aren’t your regular speakers though — these are designed to generate pressure waves in the 40kHz range, way higher than the 20kHz upper audible threshold for human hearing. 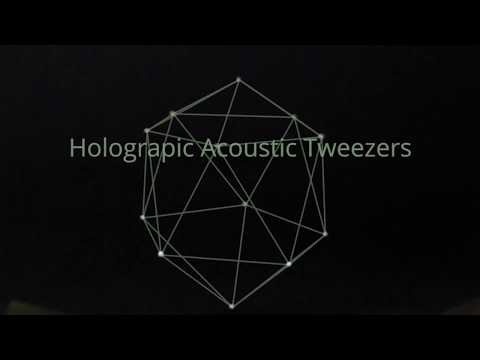 This setup was able to suspend 25 tiny styrofoam balls in the air all at once. What’s more, each ball can be moved individually — the kind of flexibility that is required to position cells within printed assemblies or even living tissue. Of course, moving some tiny objects doesn’t nearly compare to the intricacies of surgery, but the researchers are confident they can achieve laser-like precision and control without the downsides. In the future, they plan on demonstrating HOT in water, and later in biological tissue.

HOT was described in the journal Nature Communications.