First sparks of life could have appeared from volcanoes

by Mihai Andrei
in Chemistry, Environment, Oceanography
A A 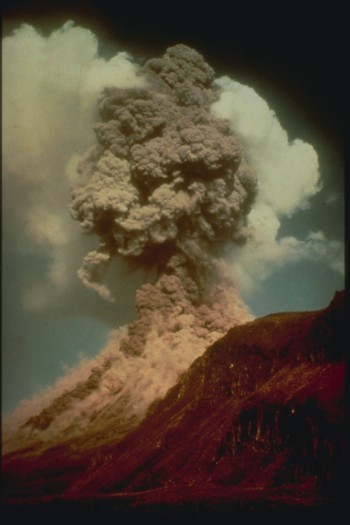 Jeffrey Bada is a researcher at Scripps Institution of Oceanography. He and his colleagues reanalyzed the classic experiment concerning the origins of life conducted by Stanley Miller who along with Harold Urey realized what we know today as the Miller-Urey experiment. This experiment showed that organic compounds can be created with no relative difficulty from inorganic substances.

Bada was a student of Miller’s, and he is now a professor of marine chemistry at the UC of San Diego. He worked with Adam Johnson, Indiana University graduate student and reanalyzed samples from the Miller experiment.

“We believed there was more to be learned from Miller’s original experiment,” said Bada, co-author in the paper. “We found that a modern day version of the volcanic apparatus produces a wider variety of compounds.”

Miller’s already famous “primordial soup” is still used today in many schools around the world to teach students about chemical reactions that occur in volcanic eruptions that are rich in vapor. In a closed experiment, they circulated methane, ammonia, water vapor and hydrogen that simulate Earth’s early atmosphere and sent a lightning spark through it. Students can then observe that organic compounds are found in the mixture in just a few days. Also, it is believed that in our planet’s early days, the land mass was represented by many small volcanic islands. Lightning and the gases eliminated by these volcanoes could be what caused life to appear and develop. Bada and his team are the first to follow the experiments that Miller conducted a while ago, and they believe that they can find other things that the brilliant scientist could have missed.

“Historically, you don’t get many experiments that might be more famous than these; they redefined our thoughts on the origin of life and showed unequivocally that the fundamental building blocks of life could be derived from natural processes,” said lead author Adam Johnson, a Indiana University graduate student with the NASA Astrobiology Institute team.