We've all had days when we've felt invisible metaphorically, but Swedish researchers have taken it to the next level - they've made a man actually feel like he's invisible.

We’ve all had days when we’ve felt invisible metaphorically, but Swedish researchers have taken it to the next level – they’ve made a man actually feel like he’s invisible.

The experiment, which was conducted on 125 participants, was a variation of the so-called rubber hand illusion – a popular trick which actually holds a lot of insight on how the human brain works. In the rubber hand illusion, you sit with your real hand under a table and out of sight, while a rubber hand sits in front of you. The experimenter strokes the fake hand in time with your real one, and you only get to see the fake one, so you sort of believe that one is yours – sort of like a phantom hand. Henrik Ehrsson from the Karolinska Institute is a master of this illusion, and he wanted to see how far the trick can be taken.

In this new setup, participants wore a virtual reality headset, linked to a nearby downward-pointed camera. A researcher stood at arm’s length from the subject, with a paintbrush in each hand. With one hand, he was actually stroking the participant, while with the other one, he made a similar motion onto what the participant perceived to be his or her invisible body. To make the entire thing more interesting, experimenters had an audience of “seriously looking strangers” assist the entire thing. When the brush motions weren’t synced up, the subjects maintained their sense of self. But when they were, subjects reportedly felt like they actually were the empty space – in other words, they felt invisible. 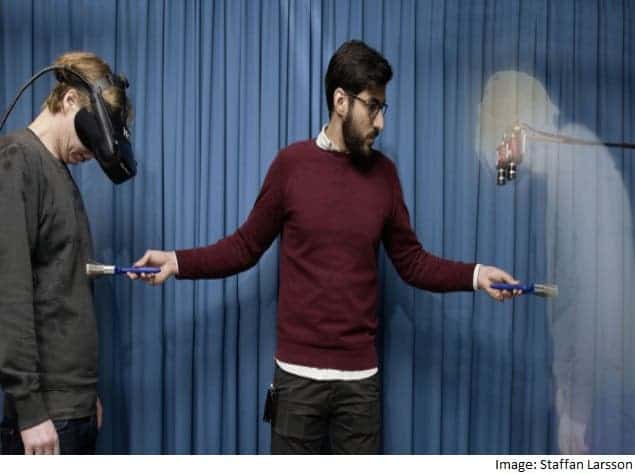 “Within less than a minute, the majority of the participants started to transfer the sensation of touch to the portion of empty space where they saw the paintbrush move and experienced an invisible body in that position,” explained Arvid Guterstam, lead author from the Karolinska Institutet in Sweden. “The present study demonstrates that the ‘invisible hand illusion’ can, surprisingly, be extended to an entire invisible body,” he noted.

To actually prove that participants felt like they were the invisible space next to them, experimenters made a stabbing motion with a knife, towards the empty space. When the illusion was up, participants were scared and exhibited increased sweat response (in some cases, even a visible reaction).

But this isn’t just a cool experiment to make people feel like they’re invisible, it may have significant implications in terms of understanding and dealing with anxiety. As scientists explain, when people felt invisible, it actually made them significantly less anxious.

“We found that their heart rate and self-reported stress level during the ‘performance’ was lower when they experienced the invisible body illusion,” Guterstam noted.

They’re also interested in studying what feeling invisible does to participants’ sense of morality. If the internet is some sort of indication, feeling invisible will make people bring out the worse in them, but that’s something that still remains to be seen.

“We are planning to expose participants to a number of moral dilemmas under the illusion that they are invisible,” says co-author Arvid Guterstam, “and compare their responses to a context in which they perceive having a normal physical body.”