Not your typical stellar explosion.

When you’re a star, life is bright — but death literally comes with a blast. Recently, astronomers have documented one of the most spectacular stellar downfalls that they know of. Although it usually takes at least a couple weeks to months for a supernova to fade away into oblivion, a team of researchers found that some 1.3 billion light-years away, a very bright and rare supernova disappeared incredibly fast — in only a matter of days. What’s more, before its grand finale, the star became wrapped itself in a ‘cocoon’ of gas and dust before triggering an intense explosion.

The fast and the furious

When a star is ready to drop the curtain, it goes out with a bang — a titanic explosion known as a supernova. Although it might sound dramatic, these highly energetic events are quintessential to seeding new stars and solar systems, as they expel and distribute matter throughout the universe. Thus, understanding supernovas is key to demystifying the grander astronomic picture — how the cosmos evolves and how we all came to be.

Supernovae are the biggest explosions we’ve ever observed but not all of them are created equal as both their intensity and duration can vary. For instance, Fast-Evolving Luminous Transients (FELTs) are an exotic type of supernova that fade away in a matter of days rather than months. It was discovered only a few years ago when NASA researchers discovered an unusual blip in a far-away galaxy spotted by the Kepler spacecraft.

In a new study, Armin Rest, now an astronomer at the Space Telescope Science Institute in Baltimore, along with colleagues have recently described the most extreme example of a FELT supernova. The unprecedented FELT, known as KSN 2015K, exploded 1.3 billion light-years away. In just a little over two days, it reached its peak brightness, about 10 times less than other supernovae typically take. About 7 days later, the supernova dimmed to half its peak brightness. By the 25th day, there was no more sign of KSN 2015K. Spoof!

Intriguingly, the data suggests that a year before it met its maker, the star expelled a dense shell of gas and dust. This material wrapped around the star like a cocoon and was later expelled at huge velocities when the star ultimately exploded. When the supernova explosion caught up to the outer shell, the debris lit up similarly to a light bulb. This seems to be a defining characteristic of a FELT supernova. In the absence of more data, scientists previously thought that a FELT was the afterglow of a gamma-ray burst, a supernova boosted by a magnetar (neutron star with a powerful magnetic field), or a failed Type Ia supernova.

The video simulation shows how all of this might have played out. 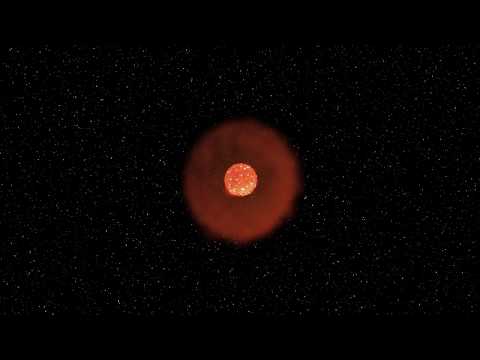 “We collected an awesome light curve,” said Armin Rest of the Space Telescope Science Institute in Baltimore, Maryland. “We were able to constrain the mechanism and the properties of the blast. We could exclude alternate theories and arrive at the dense-shell model explanation. This is a new way for massive stars to die and distribute material back into space.

“With Kepler, we are now really able to connect the models with the data,” he continued. “Kepler just makes all the difference here. When I first saw the Kepler data, and realized how short this transient is, my jaw dropped. I said, ‘Oh wow!'”