Some stars go out with a bang -- a supernova explosion! Using optical images recorded by the now defunct Kepler telescope, astronomers witnessed for the very time the shockwave that follows a star's implosion once it runs out of fuel.

Some stars go out with a bang — a supernova explosion! Using optical images recorded by the Kepler telescope, astronomers witnessed for the very time the shock wave that follows a star’s implosion once it runs out of fuel.

Spotting a supernova isn’t easy. Imaging the shockwave is even harder, since it lasts less than an hour. Considering a star can stay active for many billions of years, you’d need to monitor a huge patch of the sky in hope that one of those trillions of star will eventually blow up but using this method, the researcher were actually lucky since in any galaxy a supernova will occur every 100 to 200 years.

The Kepler Space Telescope analyzed light coming from 500 different galaxies, or 50 trillion stars, over a three year period. Two supernovae were caught in the act: KSN 2011a and KSN 2011d. Only for one of them though was the shockwave recorded, the other being obstructed by gas and dust. Amazingly, the star in question, KSN 2011d, is a red giant 500 times larger than our sun, and 1.2 billion light years away.

“Like police getting surveillance footage of a crime after the event, we can study brightness histories from Kepler to find out what was happening in the exact hour that the shock wave from the stellar core reached the surface of the star,” said Edward Shaya, an associate research scientist in astronomy at UMD and a co-author on the study. “These events are bright enough that they change the brightness of the whole galaxy by a measurable amount.”

Supernovae are basically stellar eruptions, triggered either by the gravitational collapse of a massive star, or by sudden re-ignition of nuclear fusion in a degenerate star. They are amazing manifestation of energy – for brief moments, a supernova can outshine an entire galaxy, radiating as much energy as the Sun or any ordinary star is expected to emit over its entire lifespan, before fading after a few weeks or months. The shock breakout immediately precedes the ‘big event’ and is essentially a massive flash of brightness.

Artists re-created the shockwave using CGI, but based on actual data recorded by Kepler. What you can see below is as a close as you’ll get to a realistic supernova shock breakout. 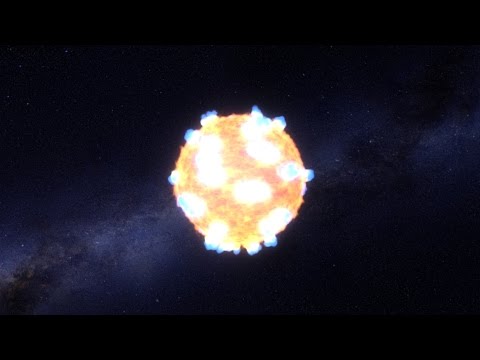 Supernovae have a double role in the Universe, which I can’t help but describe as romantic. The event marks the final stage in a star’s life. The massive explosion, however, spews immense amounts of matter into outer space — in some cases enough to found thousands of new planet Earths. We’re all made of star dust, remember.

“All heavy elements in the universe come from supernova explosions. For example, all the silver, nickel, and copper in the earth and even in our bodies came from the explosive death throes of stars,” Steve Howell, project scientist for NASA’s Kepler and K2 missions, said in a statement. “Life exists because of supernovae.”