Second largest meteorite in the world, a 30-tonne monster, unearthed in Argentina

This puppy must have made some damage.

by Dragos Mitrica
in News
A A

A huge meteorite was excavated from Argentina’s famous Campo del Cielo, a well-known meteorite crash site. Estimates suggest the cosmic debris weighs more than 30 tonnes which ought to make it the second largest intact meteorite found so far.

The crater field of Campo del Ceilo, 1085km north of Buenos Aires, is comprised of at least 26 meteorite craters, created by impacts estimated to be 4,000-5,000 years old. The first record of the Campo dates from 1576 when the Spanish governor learned of some native indians who were dealing iron. When questioned, the indians said the iron fell from heaven and directed the Spanish authorities to the meteorite field. An expedition under the command of one Captain de Miraval reportedly brought back a few pieces of the iron-rich meteorites, among them a huge catch called the Meson de Fierro, which literally means large table of iron.

Oral indian tradition about the iron falling from the sky goes way back than the Spaniards. It could be that these tales are thousands of years old since the meteorites crashed in the Campo for the first time. Nevertheless, more than 100 tonnes have been excavated so far from the site blistered with craters.

The larger Campo del Cielo meteorites are found in and around a series of small craters in the southwestern part of the strewn field, where the largest crater is 78 by 65 meters. It was in one of these craters that a very large rock was excavated on September 10.

Though the meteorite needs to be properly weighed and assessed by scientists to find out things like its mineral composition and age, the find already looks like one destined for the history books.

The largest meteorite ever found — called Hoba — weighs more than 60 tonnes and was found in Namibia nearly a century ago by a farmer ploughing a field. You can still find it in the same location it fell more than 80,000 years ago. According to the Astronomy Association of Chaco, the newly uncovered meteorite is the second largest, despite El Chaco, the current runner-up discovered in 1967, weighing 37 tonnes.

It’s not clear yet if this new meteorite is the second largest in the world, but what’s for sure is Argentina now has two entries in the top three.

“We could compare the weight with the other large meteorite found in the province,” Mario Vesconi, the president of the Astronomical Association, to the Argentinian government’s news service, Télam. “Although we expected it to be heavier, we did not expect it to exceed 30 tons.”

“We will weigh it again,” Vesconi said. “Apart from wanting the added confidence of a double-check of the initial readings we took, the fact that its weight is such a surprise to us makes us want to recalibrate.” 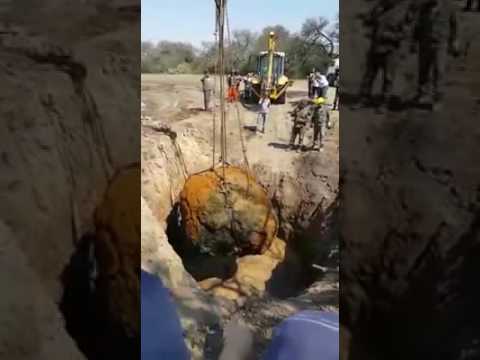