Taking inspiration from babies, this machine learns to predict seconds into the future.

Researchers at the University of California, Berkeley, have developed a robot that has the ability to learn like a human toddler, allowing it to predict outcomes. Called Vestri, the robot is capable of learning all by itself with no human supervision required.

Teaching a robot how to play

When toddlers play with toys, they’re doing more than just entertaining themselves. Effectively, with every twist or throw the children learn about how the world works. By manipulating objects, toddlers learn how these respond all by themselves and can then form judgments about how these objects will likely behave in the future if used in the same way.

This great learning strategy, sometimes called “motor babbling”, has been emulated by American scientists into the Vestri robot. The technology in question, called “visual foresight”, effectively enables the robot to imagine what its next action should be and what the likeliest consequences might look like, and then take action based on the best results.

“Children can learn about their world by playing with toys, moving them around, grasping, and so forth. Our aim with this research is to enable a robot to do the same: to learn about how the world works through autonomous interaction,” said UC Berkeley assistant professor Sergey Levine and lead author of the study which was presented at the Neural Information Processing Systems conference. “The capabilities of this robot are still limited, but its skills are learned entirely automatically, and allow it to predict complex physical interactions with objects that it has never seen before by building on previously observed patterns of interaction.

Scientists hope that in the future, such technology could enable self-driving cars to predict roads ahead but for now at least, this ‘robotic imagination’ is fairly simple and limited. Vestri can make predictions only several seconds into the future but even that’s enough to help it figure out how to best move objects around on a table without disturbing obstacles. Vestri chose the right path around 90 per cent of the time. 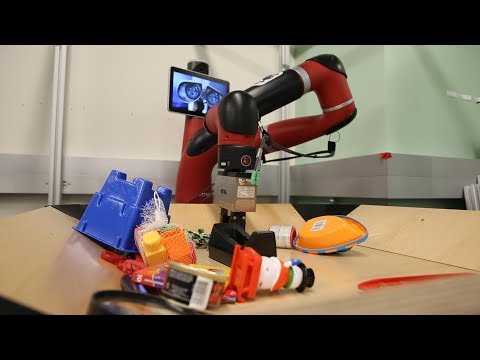 What’s crucial about this skillset is that no human intervention nor prior knowledge about physics is required. Everything Vestri learned, it’s done so from scratch from unattended and unsupervised exploration — ‘playing’ with objects on a table.

After it had trained itself, Vestri is able to build a predictive model of its surroundings. It then uses this model to manipulate new objects it had never encountered before.  The predictions are produced in the form of video scenes that had not actually happened but could happen if an object was pushed in a certain way.

“In the same way that we can imagine how our actions will move the objects in our environment, this method can enable a robot to visualize how different behaviors will affect the world around it,” said Levine. “This can enable intelligent planning of highly flexible skills in complex real-world situations.”

Because Vestri’s video predictions rely on observations made autonomously by the robot through camera images, the method is general and broadly applicable. That’s in contrast to conventional computer vision techniques which require human supervision to label thousands or even millions of images.

Next, the Berkeley researchers want to expand the number of objects Vestri is able to play with but also to enhance the movements its capable of making. By expanding its repertoire, the researchers hope to make Vestri more versatile and adapted to all sorts of environments.