Kilauea volcano in Hawaii erupts, threatening local community. So far, everyone is safe

Thankfully, everyone is safe.

Kilauea, one of the world’s most active volcanoes, has erupted at around 4:30 p.m. local time, ejecting magma, rocks, and toxic fumes.

“It sounded like there were rocks in a dryer that were being tumbled around,” said Jeremiah Osuna, who lives near Leilani Estates, one of two subdivisions evacuated. “You could hear the power it of it pushing out of the ground.” 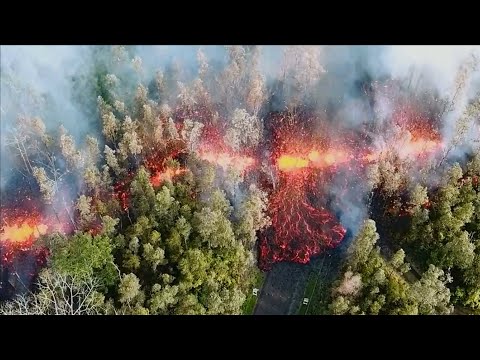 The eruption didn’t exactly come as a surprise, not only because Kilauea is extremely active and eruptions happened regularly, but also because the eruption was preceded by a series of over 600 earthquakes — one of them going as high as 5.0 in magnitude.

All 1,500 inhabitants of Pahoa, which is close to the eruption, were told to leave after steam and lava started pouring out of a crack. In total, thousands of people have been evacuated following the eruption, with Governor David Ige saying he activated military reservists from the National Guard to help with the evacuations.

UPDATE: The lava is flowing onto streets in the subdivision, which consists of about 770 structures. The lava flow has prompted the mandatory evacuation of about 1,700 residents of Leilani Estates.Residents are being sheltered at Pāhoa Community Center & Kea‘au Community Center.

Currently, new ground cracks have been reported in the area, but the eruption seems to have calmed down. However, authorities have urged people to remain on alert. The opening phases of fissure eruptions are dynamic. Additional vents and new lava outbreaks may occur and at this time it is not possible to say where new vents may occur, the USGS writes.

Thankfully, no one was reportedly injured during the eruption. If anything, Hawaiians have grown to be quite resilient in the face of such eruptions. But, even for veterans, the event can be disturbing.

“Living on a volcano, everybody has got pretty thick skin. They know the risk,” said Ryan Finlay, who lives in Pahoa and runs an online trade school. “Lava for the most part has flown to the ocean the last 30 years. Everybody gets in a comfort zone. The last couple weeks, everything changed.”

For all its spectacular eruptions, Kilauea isn’t a particularly dangerous volcano. Its name means “spewing” or “much spreading” in the Hawaiian language (referring to its frequent outpouring of lava), but Kilauea is a shield volcano — a type of volcano usually composed almost entirely of fluid lava flows. Because the lava is so hot and fluid, it flows instead of blowing up, which means that eruptions tend to be less violent.

The first well-documented eruption of Kīlauea occurred in 1823, and since then, the volcano has been erupting more or less all the time. The volcano lies directly over the Hawaii hotspot — an area which is fed hot material directly from the mantle. In a way, the Earth’s mantle is “leaking” through Hawaii.