Things continue to be pretty nasty in Hawaii.

The Hawaiian volcano of Kilauea continues its explosive streak with a massive bang, creating what is essentially the modern version of Mordor.

Kilauea’s summit is rapidly deforming, aerial surveys have shown. The volcano was rocked by more than 180 explosions and earthquakes — with one explosive event throwing ash and gas plumes that towered to nearly 10,000 ft (over 3 km).

The USGS reported that there is little ground motion around the volcano, but the summit is subsiding rapidly. However, despite this, there’s very little chance of a summit collapse. The situation is still unclear and could change in the near future.

The USGS geologists added they’re not really sure for how long the volcano will continue to erupt — the only thing they know is that there have been massive eruptions, and there’s a good chance the eruptions will continue:

“We’re not exactly sure how much magma is stored beneath the summit. We have only estimates, but we are confident it is at least in excess of 100 times what has been erupted so far from Fissure Eight.”

Over 600 homes have already been destroyed by the lava, which the volcano is spewing out at a speed of 100 cubic meters per second — the equivalent 26,000 US gallons (98,000 liters) per second, roughly enough to fill 720 dump trucks every minute. Lava now covers 9.24 square miles (24 square km), the Hawaii Civil Defense Agency confirmed on Saturday.

More than 2,000 people have already been forced to relocate, and the eruption continues.

It’s not just the eruption itself, volcanic dust is also a health hazard, even if it cools down because it contains small bits of glass which can damage the nose or throat.

Now, Kilauea seems to have settled down a bit. You can keep an eye out on it yourself using the USGS 24/7 livestream: 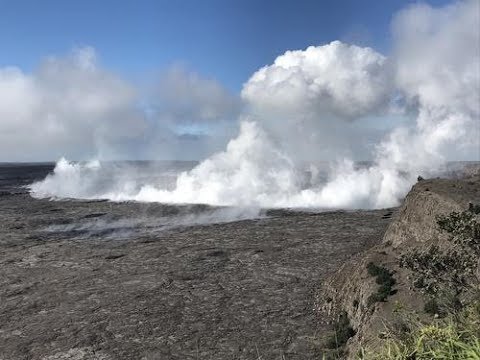 Alternatively, you can also stay up to date by following the USGS website or local social media accounts, for candid stories.

#LeilaniEstatesEruption #KilaueaVolcano UPDATE (June 17 at 10:30 AM): New aerial video taken yesterday by the Hawaiʻi National Guard captures the full extent of the #Fissure8 fountain in #LeilaniEstates and the fast-moving lava flow it has produced, as it continues to pour into what was once #KapohoBay. According to the Hawaiian Volcano Observatory: “Fountains from the Fissure 8 spatter cone continue to feed lava into the well-established channel that flows to the ocean at Kapoho. Occasionally, minor amounts of lava briefly spill over the channel levees. The ocean entry remained fairly broad with laze blown onshore. Fissures 16/18 continue to ooze lava and incandescence and mild spattering were observed from Fissure 6/15 vicinity yesterday. The flow field is relatively stable with little change to its size and shape for the past few days. Seismicity at Kīlauea's summit gradually increased to about 30 earthquakes per hour overnight and a few events were felt in the Volcano area. At 06:26 AM HST, HVO instruments recorded energy release consistent with a subsurface explosion but the resulting gas plume, reported to be brief and nearly devoid of ash, was observed to 5,000 to 7,000 ft above sea level. Inward slumping of the rim and walls of Halemaʻumaʻu continues in response to ongoing subsidence at the summit.” Residents of Hawaiʻi County who suffered damage or losses from the recent Kīlauea volcanic eruption and earthquakes, can now register for disaster assistance with the Federal Emergency Management Agency (FEMA). The Disaster Recovery Center or DRC, is open daily from 8am to 8pm, and is located at the Keaau High School Gym. Shuttle buses will be running between the two shelters and the DRC from 7:30 am to 9 pm. The shuttles run every 20 minutes from the Keaau Armory, and every hour from the Pahoa Community Center shelter. DRC schedule: Sunday -Vacationland, Kapoho, Green Farm Lots and Kapoho Beach Lots; Monday – Volcano. (Click the link in my bio for ALL the DRC details) Stay tuned to @HawaiiNewsNow #HInews #HawaiiNews #HNN #HawaiiNewsNow #WeAreYourSource (Video taken yesterday by Hawaiʻi National Guard, Tech. Sgt. Andrew Jackson)