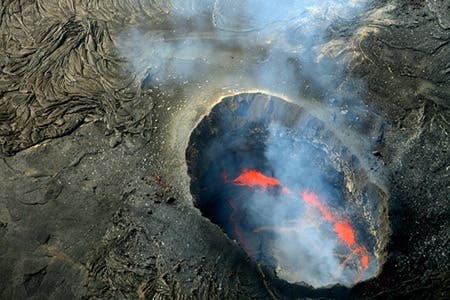 Hawaii isn’t all warm breezes, mojitos and surfing; it’s what geologists call a hot spot, one of the most active volcanic regions on the face of the planet, so it was little surprise when Kilauea erupted; after all, it is one of the most potent volcanoes in the world, being in a constant eruption since the 3rd of January, 1983 (yes, you read that right)

This time, lava came out to the surface through a fissue, after the Pu’u ‘Ō’ō crater collapsed, event which led to the dramatic and destructive display we can see now; the magnificent volcano threw lava at heights of 65 feet, which then began to flow. As USGS reports, it is still erupting powerfully at two locations, and no less than 18 earthquakes were detected inside the volcano (I haven’t been able to find out their magnitude, but they shouldn’t be too great – still, the seismic tremor levels remain significantly elevated).

You can get maps, photos, videos, and even webcam views at Kilauea status, and we will also keep you posted with what happens.

Despite the fact that this eruption doesn’t come as a surprise to anybody, the 370 feet collapse of one of the volcano’s floors (Pu’u ‘O’o) was pretty unexpected. Janet Babb of the U.S. Geological Survey said this weekend’s activity indicates “new episodes in eruptions and further unknowns”.