Europa's water is acting up.

by Dragos Mitrica
in Alien life, Astronomy, News
A A

Astronomers working with NASA’s Hubble Telescope have confirmed what many researchers were already suspecting: water plumes are erupting from Jupiter’s moon Europa. This means that we could sample the water on the satellite without having to drill into it.

If I asked you to guess where we have the best chances of finding life outside of Earth, you’d be hard pressed to think about Europa. But Jupiter’s frozen moon is definitely a likely candidate. We’ve written extensively before about the life harboring possibilities of Europa. Beneath the frozen surface, Europa hosts a salty ocean. There are already some indications about the chemistry of that ocean and its life hosting capabilities, but acquiring valuable samples would be very difficult because we’d have to drill through a lot of ice. Thankfully, we might get a bit of help from the local geology – basically, we could just send a shuttle there and the water might come to it.

“Europa’s ocean is considered to be one of the most promising places that could potentially harbor life in the solar system,” said Geoff Yoder, acting associate administrator for NASA’s Science Mission Directorate in Washington. “These plumes, if they do indeed exist, may provide another way to sample Europa’s subsurface.”

Europa’s subsurface oceans have twice as much water than Earth’s, so there’s plenty of material to be ejected – the watery plumes are estimated to rise to about 125 miles (200 kilometers). The team, led by William Sparks of the Space Telescope Science Institute (STScI) in Baltimore observed these ejections while studying Europa’s atmosphere.

“The atmosphere of an extrasolar planet blocks some of the starlight that is behind it,” Sparks explained. “If there is a thin atmosphere around Europa, it has the potential to block some of the light of Jupiter, and we could see it as a silhouette. And so we were looking for absorption features around the limb of Europa as it transited the smooth face of Jupiter.”

[panel style=”panel-success” title=”Life on Europa” footer=””]- Jupiter’s satellite Europa has a liquid ocean beneath its frozen surface
– Europa’s ocean has similar chemical and energy characteristics to that of Earth
– This may hint at the satellite’s life-bearing possibilities, but a more robust exploration is needed.[/panel]
During observations which lasted 15 months, the team noticed plume-like features three times. This confirms a previous study conducted by Lorenz Roth of the Southwest Research Institute in San Antonio, which detected vapor erupting from the frigid south polar region of Europa. They both used the same equipment but used a different method to reach the same conclusion. 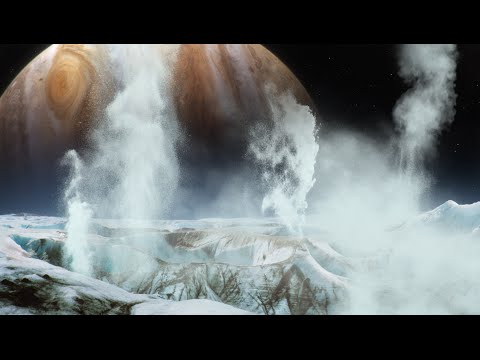 “When we calculate in a completely different way the amount of material that would be needed to create these absorption features, it’s pretty similar to what Roth and his team found,” Sparks said. “The estimates for the mass are similar, the estimates for the height of the plumes are similar. The latitude of two of the plume candidates we see corresponds to their earlier work.”

However, even if these plumes are real, there’s no evidence that they are connected to the subsurface ocean. Europa’s surface is riddled with geological features, cracks and fissures, which could host liquid pockets of water – the plumes could originate there.

Both NASA and the European Space Agency are planning missions to Europa, and many astronomers are eagerly supporting a thorough exploration of the satellite. There is already a NASA spacecraft at Jupiter called Juno, which may provide more information about these plumes, but is not designed for this purpose.

“We took great pains to make sure that that spacecraft does not get anywhere near Europa, because we want to protect Europa from contamination,” says Curt Niebur, NASA’s program scientist for outer planets missions.

The work by Sparks and his colleagues will be published in the Sept. 29 issue of the Astrophysical Journal.