Tasting the surface of Europa

by Mihai Andrei
in Alien life, Astrophysics, Chemistry
A A

If you were to lick the surface of Jupiter‘s icy moon Europa, you would actually be sampling a bit of the ocean beneath – at least that’s what a new paper by Mike Brown, an astronomer at the California Institute of Technology in Pasadena, Calif., and Kevin Hand from NASA’s Jet Propulsion Laboratory concludes. 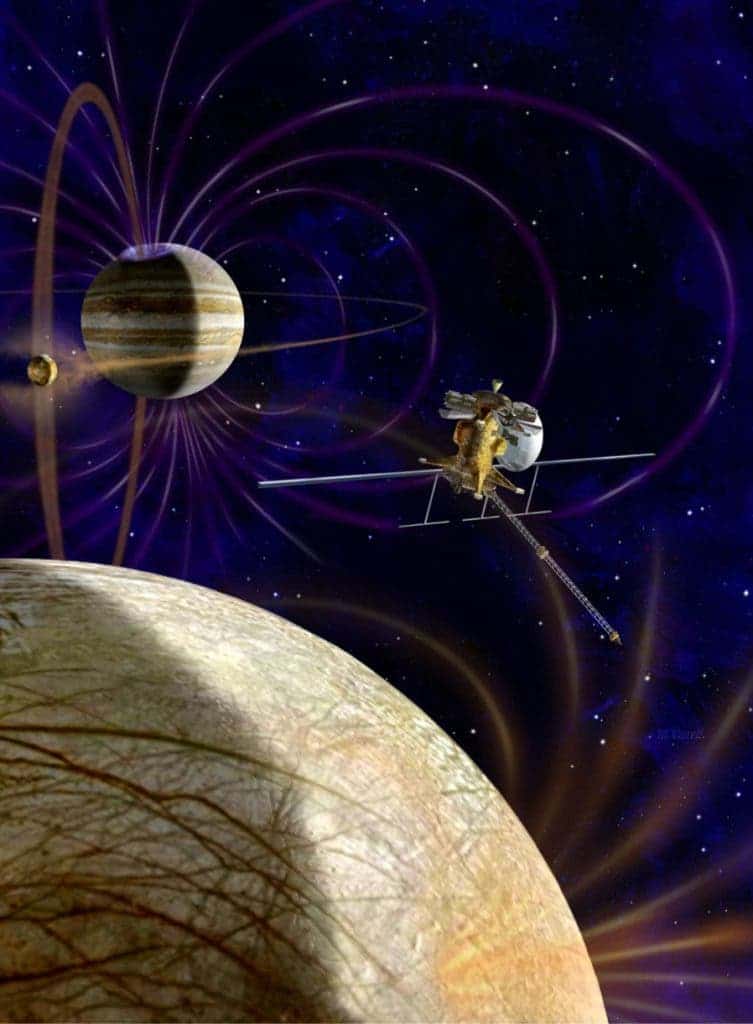 Their work details the strongest evidence yet that salty water from the vast liquid ocean beneath Europa’s frozen exterior actually makes its way to the surface. To get to this conclusion, they used data from the NASA Galileo mission, which studied the planet Jupiter and its moons, to conclude that there is a chemical exchange between the ocean and surface, which makes the ocean an even richer chemical environment, and in turn, an even more likely place to find life. As Brown explains:

“[This exchange] means that energy might be going into the ocean, which is important in terms of the possibilities for life there. It also means that if you’d like to know what’s in the ocean, you can just go to the surface and scrape some off.”

Europa is slightly smaller than Earth’s Moon. At just over 3,100 kilometres in diameter, its density suggests that it is similar in composition to the terrestrial planets, being primarily composed of silicates. This along with the ocean it harbors beneath its frozen surface are the reasons why Europa has emerged as one of the top locations in the Solar System in terms of potential habitability and the possibly of hosting extraterrestrial life. 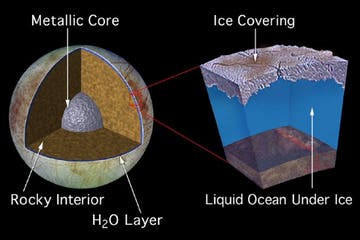 At first, Brown and Hand mapped the distribution of pure water ice versus anything else – this showed that Europa harbors vast quantities of non-water ice. Then, at low latitudes on the trailing hemisphere, the area with the highest concentration of non-water ice, they found a big anomaly – a major dip in the spectra. Then, they set out in the lab to recreate various substances and see which one will create the same signature that is seen on Europe – after several tries, magnesium sulfate was declared the winner.

Magnesium sulfate is probably generated by the irradiation of sulfur ejected from the Jovian moon Io and (the authors believe) from magnesium chloride salt originating from Europa’s ocean – hence the conclusion that the ocean is communicating with the surface. Now, there’s not really any clear indication that it does come from there, but it’s rather a case of eliminating all impossible sources, and see what you are left with.

If this is true and in fact there is not a big source researchers are missing, then this means that Europa’s ocean is pretty similar in composition to Earth’s oceans – and that makes it an enchanting place for life.

“If we’ve learned anything about life on Earth, it’s that where there’s liquid water, there’s generally life,” Hand said. “And of course our ocean is a nice, salty ocean. Perhaps Europa’s salty ocean is also a wonderful place for life.”