Jupiter now officially has 69 moons. There are likely more to be confirmed

The massive gas giant likely adopted the cosmic bodies when they came too close to Jupiter's gravitational pull.

It’s amazing how astronomers are still discussing the possibility of finding a new planet in the solar system in 2017. Compared to that, finding new moons shouldn’t be all that surprising, especially around Jupiter which is some 630 million miles away from Earth. In fact, the environment around Jupiter, a planet 317 times bigger than our own, seems to mirror the solar system itself — Jupiter is like a sun with its large Galilean moons orbiting around it like planets. The newly discovered Jovian moons, S/2016 J1 and S/2017 J1, are anything but large, barely 1-2 kilometers in size, which explains why these took so long. That brings the number of known Jupiter moons to a staggering 69.

The two new moons were discovered by a team led by astronomer Scott Sheppard of the Carnegie Institution for Science. Sheppard and colleagues were actually on the lookout for something entirely different, distant objects in the outer system in the Kuiper belt and beyond. They didn’t find Planet X — a mysterious ninth planet that lurks somewhere in the outer solar system, beyond the Oort cloud — but at least they got something when Jupiter aligned with two telescopes the Carnegie Institution operates in the Atacama Desert of Chile.

Only 15 of the 69 Jovian moons orbit in a prograde sense, that is in the direction of the planet’s spin. The rest are retrograde, meaning they orbit Jupiter in the opposite direction that the planet rotates around its axis. Both moons also have a high degree of inclination, between 140º to 150º off the orbital plane of Jupiter. These clues suggest that S/2016 J 1 and S/2017 J1 were likely captured by Jupiter’s gravitational tug when they ventured too close to the biggest planet in the solar system.

I mentioned earlier that Jupiter is so massive it resembles a solar system. Well, the objects that orbit Jupiter certainly act this way. These take anywhere from 7 hours to a mindboggling 1,000 days to come full circle around the gas giant. S/2016 J1 and S/2017 J1, for instance, orbit at an average distance of  20,600,000 km and 23,500,000 km from Jupiter, respectively.

Eleven of Jupiter’s moons have such irregular orbits that they’re considered ‘lost’. Sheppard and his collaborators found all but one of those in 2003, and they haven’t been observed since. But S/2016 J1 and S/2017 J1 aren’t ‘lost’ at all — we just got to meet them for the very first time.

“S/2016 J1 and S/2017 J1 are new moons we first observed in March 2016 and March 2017, respectively. We confirmed they were not lost moons with having over one year of observations on both, giving us 2 new Jupiter moons and making 69 known moons of Jupiter. There are likely a few more new moons as well in our 2017 observations, but we need to reobserve them in 2018 to determine which of the discoveries are new and which are lost 2003 moons. Stay Tuned,” the Sheppard wrote. 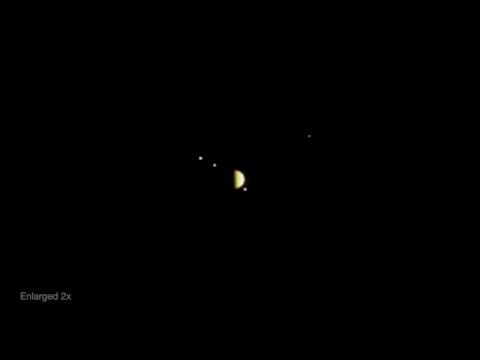 These two new moons might not look like much but they’re a great reminder of just how immense our solar system is or how powerful Jupiter’s gravitational pull can be.