Hydrogen turned into a metal for the first time. Technology and spaceflight might never be the same

If confirmed, this could be one of the most revolutionary material of the century

By subjecting molecular hydrogen, a gas, to ungodly pressures higher than those found at the Earth’s core, Harvard researchers have accomplished the impossible: they’ve turned the lightest element into a metal. This is now the rarest and possibly the most expensive material on the planet. This may soon change as metal hydrogen moves from the stuff of alchemy to a critical resource in mankind’s quest of becoming an interstellar species. 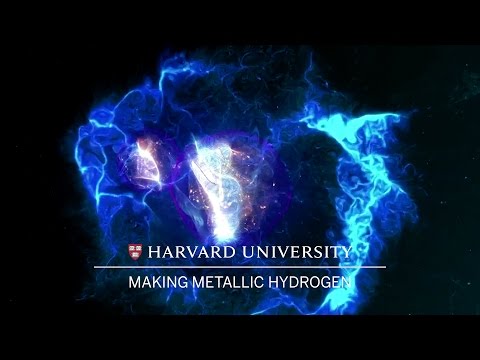 The new material was created by Isaac Silvera, the Thomas D. Cabot Professor of the Natural Sciences, and post-doctoral fellow Ranga Dias. For over a hundred years scientists knew that it was theoretically possible to turn hydrogen into a metal if you compress it under the right condition but no one was able to prove it until recently.

“This is the holy grail of high-pressure physics,” Silvera said. “It’s the first-ever sample of metallic hydrogen on Earth, so when you’re looking at it, you’re looking at something that’s never existed before.

A tiny hydrogen sample was squeezed with a pressure of 495 gigapascals, or more than 71.7 million pounds-per-square-inch. The sample was also chilled to just above absolute zero. At such a tremendous strain, the molecular hydrogen breaks down and the dissociative elements turn into atomic hydrogen, which is a metal. When the researchers stopped the experiment, everyone was dumbstruck when they saw their sample was shining!

Findings were reported in the journal Science.

What makes metallic hydrogen so interesting is the fact that it may be meta-stable, as reported by some models. In other words, once you lift the immense pressure that went into birthing the metal, the hydrogen will stay a metal. It’s akin to how graphite under immense heat and pressure turns into a diamond and remains in this configuration even after said heat and pressure is removed.

This feature has excited a lot of people, both in science and industry. That’s because metallic hydrogen has a couple of very appealing features. It’s predicted that metallic hydrogen could act as a superconductor at room temperatures, allowing electricity to flow through it with zero loss. Right now, as much as 15 percent of all the electricity we generate is lost down power lines.

It’s in transportation, however, that metallic hydrogen could be revolutionary. Its superconductive properties could make high-speed trains that use magnetic levitation a common sight. If used as a fuel, metallic hydrogen would be four times more powerful than the best propellant at our disposal today.

“And if you convert it back to molecular hydrogen, all that energy is released, so it would make it the most powerful rocket propellant known to man, and could revolutionize rocketry.

“That would easily allow you to explore the outer planets.”

Now, the researchers need to find out if the metal hydrogen is indeed stable at the surface and doesn’t decay in time.  Already, there are voices who have criticized the discovery. Speaking to Nature News, five experts claim the evidence presented so far is unconvincing.

“If they want to be convincing, they have to redo the measurement, really measuring the evolution of pressure,” says Paul Loubeyre, a physicist at France’s Atomic Energy Commission in Bruyères-le-Châtel. “Then they have to show that, in this pressure range, the alumina is not becoming metallic.”