by Mihai Andrei
in Inventions, Renewable Energy
Reading Time: 3 mins read
A A
Share on FacebookShare on TwitterSubmit to Reddit

It almost seems too good to be true – a novel device that uses only sunlight and wastewater to produce hydrogen gas could provide a sustainable energy source, while also improving the efficiency of the waste water system. 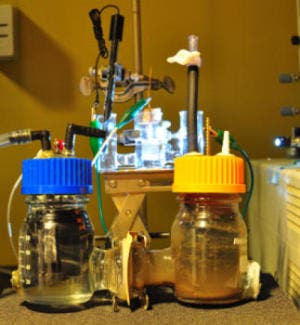 In a paper published in the American Chemical Society journal ACS Nano, a team led by Yat Li, associate professor of chemistry at the University of California, Santa Cruz described how they developed the hybrid solar-microbial device which combines a microbial fuel cell (MFC) and a type of solar cell called a photoelectrochemical cell (PEC).

In the Microbial (MFC) component, bacteria generate electricity by degrading the organic material in the waste water. The biologically generated energy is then delivered to the PEC to assist the solar-powered splitting of water (electrolysis) that generates hydrogen and oxygen.

Strictly speaking, both MFC and PEC could be used individually to generate hydrogen gas; the problem however, is that both require a small additional voltage (an “external bias”) to overcome the thermodynamic energy barrier for proton reduction into hydrogen gas. When used together, the two elements are sustainable and self driven, because the combined energy from the organic matter (harvested by the MFC) and sunlight (captured by the PEC) is sufficient to drive the electrolysis of water.

“The only energy sources are wastewater and sunlight,” Li said. “The successful demonstration of such a self-biased, sustainable microbial device for hydrogen generation could provide a new solution that can simultaneously address the need for wastewater treatment and the increasing demand for clean energy.”

Unusual bacteria, scaling, and commercial use

The microbial cells feature some rather unusual bacteria, which are able to generate electricity by transferring metabolically-generated electrons across their cell membranes to an external electrode. In order to develop this component, Li teamed up with researchers at Lawrence Livermore National Laboratory (LLNL) who have been studying electrogenic bacteria and working to enhance MFC performance. As it turns out, waste water is a perfect environment, as it contains both rich organic nutrients and a diverse mix of microbes that feed on those nutrients, including naturally occurring strains of electrogenic bacteria.

When fed with wastewater and illuminated in a solar simulator, the PEC-MFC device showed continuous production of hydrogen gas at an average rate of 0.05 cubic meters per day. Of course, in order to become actually useful, this invention has to be scaled, and considering that researchers also reported a drop in hydrogen as bacteria used up the organic matter in the wastewater, cuold this become commercially viable?

Scientists are optimistic. They are already in the process of scaling up the small laboratory device to make a larger 40-liter prototype continuously fed with municipal wastewater. This is the intermediary step, and if everything works out fine with that, then they can finally take their results to the municipality.

“The MFC will be integrated with the existing pipelines of the plant for continuous wastewater feeding, and the PEC will be set up outdoors to receive natural solar illumination,” Qian said.

“Fortunately, the Golden State is blessed with abundant sunlight that can be used for the field test,” Li added.