by Alexandru Micu
in News, Space
A A

The Intelligent Robotics Group at NASA’s Ames Research Center has designed a new cube robot destined for the ISS later this year. The one-foot box-bot is named Astrobee and will follow astronauts around, helping with housekeeping and other tasks.

It’s adorable, it’s cubic, it’s gonna hang out with astronauts — what’s not to like about the Astrobee? The little bot was designed to replace the aging SPHERES robots currently buzzing around the ISS, and has several improvements over them. Astrobee can either be operated from the ground by personnel at the Johnson Space Center in Houston or left to its own devices in autonomous operations mode. It’s equipped with radio-frequency identification (RFDI) scanners which allow it to ‘see’ the myriad tools and supply boxed aboard the ISS and keep track of inventories so astronauts can focus on more important work — like quantum physics.

Astrobee will also keep constant watch over the environmental factors aboard the space station, and its cameras will allow Houston to observe and record the astronauts and the experiments they perform — something for which the crew currently has to mount stationary cameras.

Thee of these bots will be sent to the ISS, where two will be kept operational at any one time and the other in standby. They should free up the schedule of astronauts by taking on housekeeping and monitoring tasks — because, as it turns out, sending people to space is really expensive, so NASA wants them to focus on the important bits instead of counting packets of microwaveable chicken.

Astrobee will trundle along the ISS propelled by a tiny fan-powered thruster but plans are already underway to test a magnetic propulsion system for the bots, which could allow swarms of Astrobees to fly in formation even without an atmosphere to fan. For delicate maneuvers, the box-bot comes equipped with a robotic arm to latch onto handholds in 0 g. 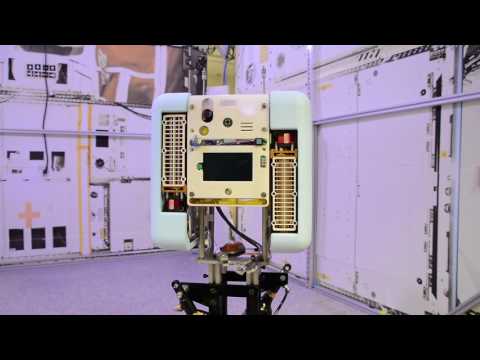