The mysterious high-energy signals are unaccounted for. Alien technology is not excluded.

Brief but intense radio pulses have been recorded emanating from FRB 121102, a dwarf galaxy some 3 billion years away. Scientists working at Breakthrough Listen — a $100 million effort to search for alien signals — have identified 15 such high-energy radio bursts. It’s far too early, however, for us to say that these are indeed signs of advanced alien technology.

“Bursts from this source have never been seen at this high a frequency,” said in a statement Andrew Siemion, director of the Berkeley SETI Research Center and of the Breakthrough Listen program.

Is this alien technology?

The radio signals beamed from FRB 121102 might be the most promising kind of evidence in decades, sought after alien-hunting researchers working with the famous SETI. Many of SETI’s leading researchers are also part of Breakthrough Listen, which has access to the world’s most advanced telescopes and ample funding.

The high-energy short burst radio emissions were detected on August 26 by the Green Bank Telescope in west Virginia, USA.

During the first scan, 12 such blips were recorded and another 3 appeared during the second scan. No further emissions could be identified during eight subsequent scans.

The data was reported in The Astronomer’s Telegram.

The project launched in January 2016 and is expected to run for at least ten years. We’re already seeing good progress, though the nature of such an inquiry demands extreme scrutiny and healthy skepticism.

That’s because there are natural phenomena that can explain the radio signals. For instance, rotating neutron stars with strong magnetic fields could produce the effect, though some astronomers were quick to point out that such objects shouldn’t be able to exist in a dwarf galaxy such as FRB 121102.

“It is surprising that the host would be a dwarf galaxy,” said Shriharsh Tendulkar of McGill University in Montreal, Canada. “One would generally expect most FRBs to come from large galaxies which have the largest numbers of stars and neutron stars. Neutron stars – remnants of massive stars – are among the top candidates to explain FRBs.”

One heart-racing, though speculative explanation, is that the radio beams are evidence of powerful laser beams used by an extraterrestrial civilization to power spacecraft. Though wild, such an idea is rooted in scientific plausibility.

Avi Loeb and Manasvi Lingam from the Harvard-Smithsonian Center for Astrophysics published a paper in early 2017 where they explore the technical feasibility of building an alien transmitting device. Their calculations suggest that light hitting an area twice the size of Earth would be sufficient to generate the observed energy in such bright radio pulses.

The aim of such a device could be to signal other life forms of its alien presence. Alternatively, such a set up could be used for interstellar travel in the form of a light sail. We, humans, are already toying with such technology.

The Planetary Society, a non-profit organization founded by Carl Sagan and now coordinated by Bill Nye, is working with a satellite-sized object called the LightSail which is completely propelled by light. The sail is made out of thin Mylar and when stretched out measures 345 square feet.

Though photons have no mass, they do have momentum and energy. Once these reflect of a receiver, which could look something like a very thin sail, some of that energy is transferred, pushing the craft. While this pressure is minute, the catch is that it builds momentum over time.

Breakthrough Listen has an even crazier idea — but crazy enough to work. They plan to send tiny space probes to our nearest star system, Alpha Centauri (4.4-light-years away), and check out its planets. The so-called “Starchips” would be carried on light sails propelled by Earth-based lasers in just 20 years, by traveling at a fifth the speed of light. The video below briefly shows how this might work. 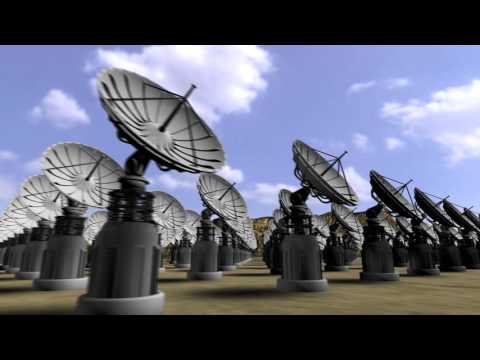 “We envision a beamer that emits the radio waves as a method of launching a light sail,” Loeb told Gizmodo. “In the same way that a sailboat is pushed by wind, a lightsail is pushed by light and can reach up to the speed of light.”

According to NASA scientist Philip Lubin, if we fired laser pulses with the same energy used today to launch rockets into space onto a light sail, we could push a 100kg payload to Mars in three days or one month for a large craft — the kind able to carry humans. “There is no known reason why we could not do this,” said Lubin.

Lubin and colleagues have now received a proof-of-concept grant from NASA to assess whether or not a photonic propulsion system for long distance space applications is viable.

Nevertheless, returning to our very interesting high-energy signal, it’s best to be cautious. No one is saying aliens are definitely involved. It’s just that there’s no water-tight hypothesis that can explain these signals. Furthermore, though I hate to be a buzz killer, it’s quite important to be aware that by the time these signals reached Earth, billions of years have elapsed since they were transmitted. Life on Earth was mostly comprised of single celled organisms when the bursts fired, and it’s possible that while we evolved down here, any aliens beaming the signals went extinct.

Hopefully, more information and insight might appear once the researchers involved are ready to publish in a peer-reviewed journal.

“Whether or not fast radio bursts turn out to be signatures of extraterrestrial technology, Breakthrough Listen is helping to push the frontiers of a new and rapidly growing area of our understanding of the universe around us,” Siemion said.