Asteroid Vesta is a lot like Earth, study shows

by Mihai Andrei
in Astrophysics, Chemistry, Geology
Reading Time: 3 mins read
A A
Share on FacebookShare on TwitterSubmit to Reddit

The cold, lifeless Vesta asteroid might be a lot more like our planet than astronomers believed – having a very active life in the early stages of the solar system evolution, a study of a Saharan meteorite shows.

The planet that wasn’t 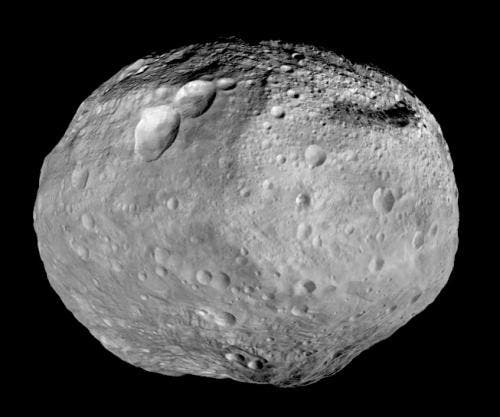 Vesta might host a magmatic layer under its rocky exterior, allowing minerals to travel between softer and harder layers of material, according to a study published online Sunday by the journal Nature Geoscience. If this were true, then Vesta is a lot more Earth like than previously believed.

“People think asteroids are big, gray, cold, almost potato-shaped lumps of rock that sometimes crash into the Earth and threaten us,” said study leader Beverley Tkalcec, a planetary geologist at Goethe University in Frankfurt, Germany. Instead, she said, “it has a dynamic interior similar to what might have been at the beginning of the Earth.”

Hot or not, Vesta is just big enough to have experienced melting inside. When this happens, the thicker, heavier material sinks towards the center and the lighter stuff gets pushed towards the crust. In this way, Vesta (much like its “cousin” Ceres) are planetary embryos that never really came to life, and since there are no tectonics to recirculate the rocks, the rocks are probably as old as the solar system.

The crystal and the electron

The study was conducted on a meteorite which is believed to have carved out Vesta’s mantle by impact; they made the connection between the meteorite by analysing its chemical and isotopical composition. However, unlike other studies which focus on the composition, this one focused on how the matter is distributed; if Vesta were indeed active beneath the surface and have a magmatic layer, then some clues should pop out.

The researchers used a technique called electron backscatter diffraction, in which basically electrons are bounced off crystals to determine their structure. They focused their research on a mineral called olivine (we’ve occasionally written about this mineral, see here) and found that instead of a regular pile of crystals with one sitting on top of each other, the crystal lattice was severely deformed.

They then tried to find something equivalent to this, and they found that the only rocks which resemble this type of structure is with igneous rocks formed by forces in Earth’s mantle – something which led to the natural conclusion that the meteorite is probably a result of the same process on Vesta, with the heavier elements sinking in.

They then plugged this data into a computer model of Vesta and found that, given specific conditions, the asteroid could host a magma ocean.

Among other things, Vesta is believer to host water and have a mountain 3 times bigger than the Everest.