by Mihai Andrei
in Geology, Space
Reading Time: 2 mins read
A A
Share on FacebookShare on TwitterSubmit to Reddit 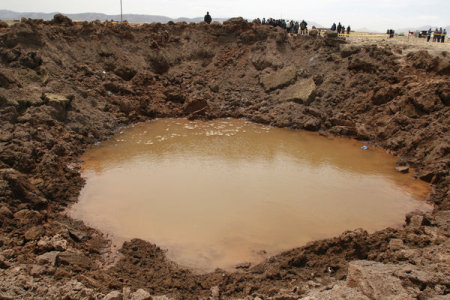 Back in September, a meteorite crashed somewhere in Peru, scaring locals and digging a hole in the ground, but pleased scientists which had the opportunity of studying it. But it behaved so strangely that in fact it forces scientists to rethink the way alien objects behave when entering Earth’s atmosphere and when they hit out planet.

The meteorite was believed to disintegrate before it reached the ground, but that is very far away from the truth, as the object left a 15 metre crater, reaching a speed which was 40-50 times faster than expected. Peter Shultz, professor of geological sciences at Brown University says it should have already melted before hitting the ground, but instead, the meteorite hit the ground with a speed of 24,000 kilometres per hour.

“They come into the atmosphere, they slow down, and they plop,” Schultz says. “It would make a hole in the ground, like a pit, but not a crater. But this meteorite kept on going at a speed about 40-50 times faster than it should have been going. We have to go back to the drawing board and think again,” he says.

The meteorite landed in what locals call an arroyo, or dry stream, so the crater was quickly filled by water from underneath the surface. The findings definetly made scientists go back to the drawing board, but hopefully this time they’ll get things right and understand more about alien objects that hit planets.