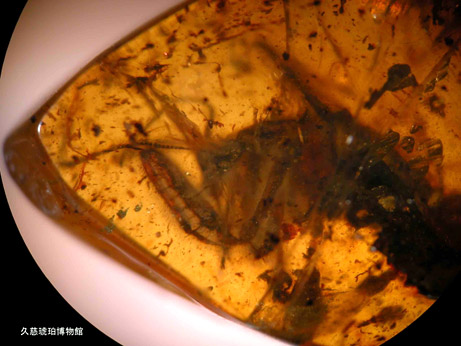 Well this is a bit of a stretch; the thing is an 87-million-year-old praying mantis was found encased in amber in Japan. Scientists believe it may prove to be very useful in establishing a connection between mantises from the Cretaceous period and modern-day insects.Researchers have been searching for this “missing link” for many years. The fossil mantis measures 0.5 inch (1.4 centimeters) from its antennae to the tip of its abdomen.

Kazuhisa Sasaki, director of the Kuji Amber Museum is the one who found this fossil in January in an amber mine in Japan’s northeastern Iwate Prefecture.

“This part of Japan is famous for producing large amounts of amber, but it was very fortunate for me to find this specimen,” Sasaki said.

According to researchers this mantis is the oldest ever found in Japan and one of only seven in the world from the Cretaceous period.

“The American Museum of Natural History has told us that no mantis from the Cretaceous period has ever been found with spines”—but the new specimen has two such spines protruding from its femur. That makes this fossil very unusual and interesting to science,” Ueda said.