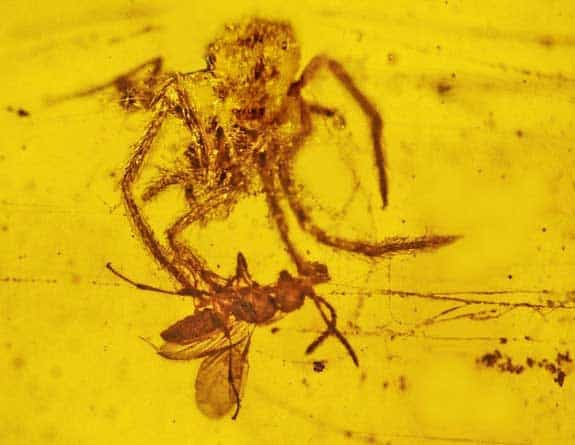 Trapped in the web, the wasp knows it’s done for, as it counts the seconds to its impending doom. The spider snatches its prey, and is prepared to act its revenge upon the ancient wasp, which is a parasite of spider eggs. But just as the final killing blow is imminent,  resin oozes from a tree bark and engulfs them both , trapping and freezing the pair in time. One hundred million years later, the scene is still there to tell the story – preserved in pristine condition, the amber fossil showcases not only tiny hairs on the spider, but also 15 intact strands of spider silk.

“This juvenile spider was going to make a meal out of a tiny parasitic wasp, but never quite got to it,” George Poinar, Jr., a zoology professor at Oregon State University, said in a statement.

“This was a male wasp that suddenly found itself trapped in a spider web. This was the wasp’s worst nightmare, and it never ended. The wasp was watching the spider just as it was about to be attacked, when tree resin flowed over and captured both of them.”

The event, which took place in  Myanmar’s Hukawng Valley in the Early Cretaceous, is the first and only fossil evidence of a spider attacking prey in its web. Amazingly, this perfectly preserved fossil was excavated in a Burmese mine. Both the spider and wasp species are today extinct, however.

The amber fossil findings were described in the journal Historical Biology.